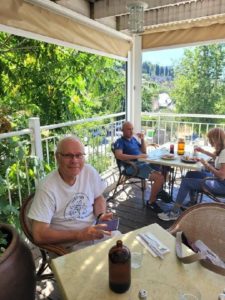 When Rabbi David Ariel-Joel walked into an Israeli café this summer – or a restaurant, or a museum, or a train, or a bus – one thing he saw plenty of were faces.
Many of the people – “the vast majority,” in his opinion – were not wearing masks, the highly transmissible Delta variant of COVID notwithstanding.
To complicate matters, wherever he went, the place was packed.
“I went to coffee shops to meet with friends; they’re filled,” Ariel-Joel said. “The open market in Jerusalem is filled…. There are pods that are open in the streets – all kinds of pop-up food places and things like that. I couldn’t believe it; it was even more crowded at night than day and people were not wearing masks, even though it was extremely crowded. Mainly, [they were] young people.”
Fresh from his 19-day trip to the Jewish state, Ariel-Joel, a senior rabbi at The Temple and a Jerusalem native, recounted for Community how Israelis are responding to the latest surge.
Earlier this year, Israel became an international sensation for its high vaccination rates while getting infection rates to enviable lows.
But now, despite the Delta variant, many Israelis are eschewing safety measures.
“Most of my friends said, ‘We really felt that it’s over,’ Ariel-Joel said. “When Bibi (Benjamin Netanyahu) was still the prime minster, he said it’s over; now that we’re vaccinated, it’s over. People don’t have the stamina for another wave. I really hope there’s not going to be a shutdown again.”
There could be.
Israel is now logging one of the world’s highest infection rates, according to an Aug. 16 story in Science magazine, with nearly 650 new cases daily per million people, more than half of whom are fully vaccinated.
“More than half are in fully vaccinated people, underscoring the extraordinary transmissibility of the Delta variant and stoking concerns that the benefits of vaccination ebb over time,” the magazine reported.
At 78 percent of those 12 and over, Israel does indeed have one of the highest vaccination rates in the world, according to Science, yet studies done in the country are showing that vaccinations blunt the Delta variant, but do not eradicate it.
Israel recently became the first country to offer a third dose of vaccine – a booster shot – to people 50 and over. The country’s new president, Isaac Herzog, got his jab in front of a battery of photographers.
But scientists warn that boosters alone will not tame the virus.
The government is making other efforts to control the spread, Ariel-Joel said. Police are now empowered to fine people for not wearing masks indoors in public places. But it’s not well enforced.
“Still most people don’t wear masks or wear them on their chins,” he said, “like they’re breathing from their chins and not their mouths.”
Some measures are working. Ariel-Joel said many Reform and Conservative synagogues (he did not attend any Orthodox services), took advantage of the weather by moving their services outdoors. Some even erected netted shade areas to protect their worshippers from the sun.
And though they were slow to do so at first, synagogues have begun to enforce mask-wearing.
In all, Ariel-Joel took five COVID tests around this visit: before flying, when he arrived, three days after arrival, just before leaving, and after his return. He passed them all.
Still, with infection rates on the rise, the rabbi is concerned for his homeland.
“I don’t know, with COVID numbers, where we’re going,” Ariel-Joel said. “It’s the same as the United States; people are tired of all the regulations. I was surprised; I thought just like the Jewish community here is very careful, it would be the same thing in Israel, but I didn’t find it that way.”

The following is an open letter to the community from the Jewish Federation of Louisville: Dear Friend of the Federation: The last several days have reminded us that, as much as we would have liked for the COVID pandemic to …

Human Resources Lee Chottiner I am an American, a Jew and a stranger The exterminator walked from room to room of my house, spraying the corners and baseboards as he does during every quarterly inspection, strains of David’s Harp lilting …

By Lee Chottiner Community Editor In a move that should produce a valuable tool for planning the community’s future, the Jewish Heritage Fund for Excellence (JHFE) and the Jewish Federation of Louisville have commissioned a comprehensive population study. Preliminary work …