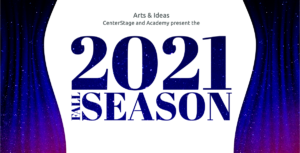 After enduring a darkened theater for 16 months, CenterStage is about to raise the curtain on a new season.
The JCC-based theatrical company, which includes arts education and theater for children, announced its return to the stage last week, releasing details of its fall schedule.
CenterStage will feature two mainstage performances this fall: Joseph and the Amazing Technicolor Dreamcoat, In Concert from Sept. 30 to Oct. 10 and Falsettos, from Nov. 11 to 21.
In addition, The Academy arts education program will stage a youth production of Aladdin, Jr. on Dec. 9, 11 and 12. And Acting Out will again bring live theater to area schools and community centers.
For CenterStage Education Programming Director Erin Jump, the shows can’t go on soon enough.
“Everyone is hungry to perform, to create,” Jump said. “We have a dedicated company of actors, musicians, crew members and patrons. Our company is a rich group of people, and I think everyone is hungry to get back.”
Center Stage went dark on March 13, 2020, as COVID pandemic sent much of the nation into lockdown. Its Academy performance of Peter Pan Jr. was its last stage production for the duration; Hair, its last mainstage production.
Since then, the consuming task of CenterStage has been to get ready to go on again when it became safe to do so.
“It’s been a constant process of writing and rewriting, planning and replanning.” Jump said.
She noted that the JCC is monitoring the COVID situation and will be ready to adjust the Center Stage season if necessary.
“I think we are all prepared for that, but we’re praying hard against it,” Jump said. “I think a lot of us have learned the fine art of flexibility in the past year.”
For now, though, here’s a look at the upcoming fall season:

Jump hopes to announce the rest of the season’s schedule when the new Trager Family JCC, along with its theater space, is ready for use.
“We are simply waiting to see, when we get in there, what we have to work with right away,” she said. “Hopefully, in the summer 2022, we will announce a full-season lineup.”

By Lee Chottiner Community Editor Gili Meisler and Bassam Aramin have reason to hate each other. Meisler, an Israeli, lost his older brother in the 1973 Yom Kippur War. The experience radicalized the then-teenager, who joined the anti-Arab Kach party, …

JCRC Scene Matt Goldberg This past year has been remarkable for many reasons. The pandemic has dominated our hearts and minds. We have reconnected with loved ones, mourned lost friends and family and adjusted to a new normal of living …

D’var Torah Rabbi Ben Freed No athlete would show up to a big game without practicing. Actors, dancers and musicians spend countless hours rehearsing before they perform for a crowd. And yet, as Jews we often think that we are …