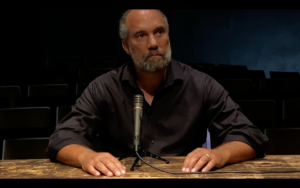 Roger Guenveur Smith plays Otto Frank, father and legacy guardian of Anne Frank, in the play “Otto Frank,” which will be presented at Teatron 2021.

Teatron 2021: A Festival of Jewish Theatre presented by the ShPIeL Performing Identity and Bunbury Theatre, will be streamed from June 24 to 27.
Among the eclectic plays to be presented at the all-virtual festival are Hitler’s Tasters, by Michelle Kholos Brooks; Mikvah, by Hadar Galron; and Otto Frank, by Roger Guenveur Smith. The festival also will do an encore streaming of Imagining Heschel, a film-play by Colin Greer about the famous rabbi-scholar-social activist Abraham Joshua Heschel, which was made in Louisville.
The themes for this year’s festival are Holocaust theatre, women and spirituality, Black and Jewish allyship and diverse Jewish diverse comedy. Theatre companies and international artists will be part of the project.
ShPIeL Performing Identity is based in Chicago, though its artistic director, David Chack, lives in Louisville, while Bunbury Theatre is a Louisville-based theatrical company.
Some of the productions have interesting side stories. For instance, Otto Frank, authored and performed by Roger Guenveur Smith, an Obie award-winning actor and writer; owes its inception to a coincidence.
“I was invited to perform Rodney King in Amsterdam and it was there that I was able to visit the Anne Frank House,” Smith said in a statement. “I imagined her father there, after the war, having lost his wife and their two daughters….
“As my anonymous narrator had pursued an impossible conversation with Rodney King,” he continued, “my Otto Frank, the custodian of his daughter’s legacy, speaks to her from far beyond her time and his own, interrogating the crisis of our present moment from a not-so-distant past…”
Mikveh, which premiered in 2004, is about women living in an orthodox community in Israel, their stories and secrets intertwining in the Jewish ritual bath – the mikveh – where women come to purify themselves once a month.
Hitler’s Tasters is an original play about the women who tasted Hitler’s food and what they discuss as they wait to see if they will live through another meal. They gossip and dream, question and dance. They want to love, laugh and, above all, survive.”
In addition to the plays, there will be a roundtable live-streamed on the second night of the festival with the performers and playwrights.
Finally, a night of diverse Jewish comedy on the last night is slated, featuring Louisville native Raanan Hirschberg, Erik Angel and Tehran Von Ghasri.
Funding for the festival comes from the Jewish Heritage Fund for Excellence; the Fund for the Arts/Louisville; anonymous donors. Partnerships include Israel Consulate of the Midwest, Keneseth Israel and Blueprint for Accountability
Visit shpielperformingidentity.com/productions/#institute or bunburytheatre.org/teatron for the full festival schedule, and showtix4u.com/events/17512 for tickets.

By Michael Ginsberg For Community When leaders of Temple Israel in Omaha met with Muslims to find a partner in relocating to another neighborhood, they brought baked goods. No surprise. So did the Muslims. A good omen. That meeting grew …