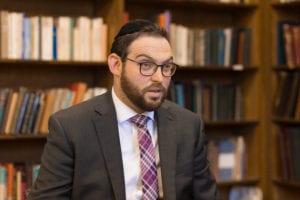 On April 18, a momentous day for Jewish Louisville, members of the community celebrated the completion of study, or siyum, by eight learners of a single tractate of Talmud.
A rare event here, the undertaking took them 1½ years to complete.
Why else was this so remarkable?
Joseph Friedenson, a noted historian and Holocaust survivor, had an experience during his youth that became etched in his mind for life:
“It was November 1939, at the beginning of the war, and just after the Nazis had occupied Poland,” he recalled. “Two Nazi officers burst into our home to loot it. I was home with my mother at the time, and she gave them money, hoping that they would leave and let us be.
“As they were about to make their arrogant exit, one of the Nazis noticed my father’s tall bookcase full of Jewish holy books. His eye fell on the beautiful bound Vilna Talmud, prominently displayed on our bookcase. Apparently, he had never seen such large volumes, so he asked me what books they were. Innocently, I replied, ‘It is the Talmud.’
“I will never forget the Nazi’s reaction. As if a cauldron of boiling water had fallen on his bare skin, he jumped up, his face contorted in rage.
“‘The Talmud!’ he bellowed, as he bounded over to the bookcase and ripped one of the beautiful volumes of that Talmud from the shelf. Then, with a diabolical hatred and brutality that I had never before witnessed, both Nazis threw the volumes on the floor and began grinding them with their heavy boots. Those books, however, were well bound and not easily destroyed. So they began ripping the pages and trashing the beautiful set, volume by volume, eventually throwing them out of the window of our apartment into the street below. 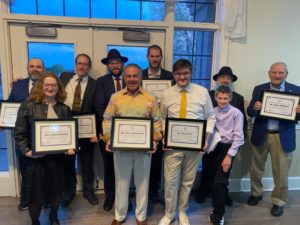 Aaron Fox, Ayala Golding, Louis Waterman, Jon White, Vlad Seder, Brian Fox, Rabbi Josh Golding and Jake Wishnia were feted at a siyum celebration on April 18. A siyum, which refers to the completion of study of a tractate of Talmud, is a rare achievement in Jewish Louisville. The class is pictured with Rabbi Simcha Snaid of Congregation Anshei Sfard, their teacher. See the D’var Torah on this page. (photo provided by Rabbi Simcha Snaid)

“They proclaimed, ‘The learners and teachers of the Talmud have the power to rebuild the Judaism that we seek to destroy.’”
How correct they were.
Look at the renaissance of Torah and Talmud study across America, Israel, South Africa, Australia. Who would have thought in just 75 years, from the ashes of the greatest tragedy in modern history, we would witness the greatest rejuvenation in modern history.
Talmud learners are not limited to large cities – New York, Chicago, Los Angeles, etc. Right here in Louisville, we have our own Talmud learners, or misaymim, and that is historic.
That proud label, misaymim, which those who completed the tractate and everyone who joined for even one class are now known by, identifies these Talmud learners as rebuilders of Judaism, which the Nazis sought to destroy. This is what we celebrated.
The eight honorees – I call them Talmud trekkies, after the name of the class, Talmud Trek – were Aaron Fox, Ayala Golding, Louis Waterman, Jon White, Vlad Seder, Brian Fox, Rabbi Josh Golding and Jake Wishnia. Each received a diploma and a gift and then shared what the Talmud and this learning experience has meant to them.
White shared how, for the first 40 years of his life, he did not know he was Jewish. “Anyone can learn, even if you start from nothing. What we are doing here is very important.”
Waterman shared how he never would have thought he would be a weekly Talmud learner.
Wishnia made the siyum in front of his children, grandchildren, and great-grandchildren.
These were some of the highlights of this wonderful evening. Space limitations have constrained a worthy quote from each graduate.
The reward for completing a tractate? Starting another one. No prior experience necessary.
You Talmud learners are the rebuilders. Wear that title with pride.
May we continue to study and learn Torah together for many more years, as we continue to carry the exalted title of Talmud learners.

By Lee Chottiner Community Editor The day after hundreds of insurrectionists stormed the U.S. Capitol in Washington, Zak Cohen met one-on-one with the Jewish middle school students at St. Francis School. He said he just wanted to check in with …