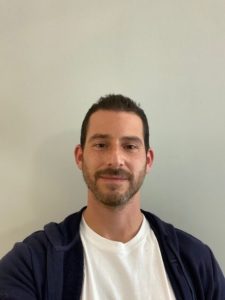 The day after hundreds of insurrectionists stormed the U.S. Capitol in Washington, Zak Cohen met one-on-one with the Jewish middle school students at St. Francis School.
He said he just wanted to check in with them, see how they were dealing with those disturbing scenes.
Their responses ran the gamut.
“Students shared: ‘This was scary.’ ‘I feel frightened,’” Cohen recalled. “Students expressed that full range of emotions…. We’re taking about 11-year-olds, 12-year-olds, 13-year-olds, 14-year-olds. We’re talking about students who are only just beginning to form their own impressions and understanding of the world.”
The meetings weren’t just a one-off deal for Cohen, 33, who is in his first year as middle school director at St. Francis. It was yet another meeting of the school’s new Jewish Affinity Group.
Cofounded by Cohen and Director of Counseling Services Julie Marks, the affinity group is a setting where Jewish middle schoolers at St. Francis can meet regularly during school hours, talking about common issues they face, feelings they experience as Jews, or simply come together once a week for a few minutes to just be Jews.
And it doesn’t hurt that Marks, an excellent baker, also brings treats to the meetings – rugelach, cinnamon raisin challah, etc.
“I feel like it’s really important to be able create spaces here, especially at really young, formative ages,” Cohen said, “to say to my Jewish students, ‘It’s OK to not only be Jewish, but it’s OK for you to care about Jewish issues and it’s OK to care about yourself and your own wellbeing.’”
The Jan. 6 attack merely drove home the need for such a group.
“You see the insurrection at the Capitol and we see swastikas; we see literal Nazis marching in our Capitol,” Cohen said. “I don’t know how many people really thought about how those images might be impacting, not just our students of color … but how is that affecting our Jewish students?”
A trend across the country, affinity groups are exclusive gatherings where young people from different backgrounds come together to share their experiences.
Affinity groups exist for students who are Black, Latinx, Asian and & Pacific Islander, LGBTQ, and Jewish – pretty much any group that feels marginalized or threatened.
Marks believes the St Francis group enhances Jewish identity among the students.
“I have been the director of counseling on the Goshen Campus [of St. Francis] for 16 years; I have never felt that Jewish students suffered as a result of not having an affinity group,” Marks said. “However, I loved the idea of giving our students who identify as Jewish a space to connect and share any concerns that arise.
“In retrospect,” Marks continued, “I wish it was something we had started earlier. Our Jewish students really enjoy having a dedicated time to discuss how it feels to be a Jewish student at St. Francis and to bond over holidays and shared traditions.”
The group isn’t always exclusive. Jewish students sometimes bring their non-Jewish friends to the gatherings.
“Other students started to hear about the rugelach,” Cohen quipped.
The mixed gathering turn out to be a good thing as non-Jews learn that there is more to the Jewish experience than what Cohen calls “the two Hs” – Hanukah and the Holocaust.
This month, about 20 Jewish and non-Jewish students gathered to talk about the murder of Sarah Halimi, a retired Jewish physician, in her Paris apartment by someone shouting “God is great” in Arabic and the rise in anti-Semitism.
“We have a very passionate, very progressively minded student body here, which is great,” Cohen said. “But often times, Jewish causes, Jewish needs, get left out of progressive conversations.”
He is concerned that American Jews, while socially active on behalf of others, do too little to help themselves.
“You can’t light yourself on fire to keep somebody else warm.”
Twelve Jewish students go to St. Francis Middle School – about 10 percent of the population – not all of whom make every meeting every week.
“It’s an opt-in program,” Cohen said. “Jews have the choice to come if they want. There can be some sessions where we have seven or eight kids; some sessions where we have fewer.”
“A lot of times it can just be easier to push our identities to the side, and I think that’s an OK thing for students to be able to wrestle with, but I like then idea that they’re able to wrestle that in a place that’s supportive of that and that actually hears them out, and that welcomes it, but also maybe challenges it or at least encourages them to push their thinking a little bit.”