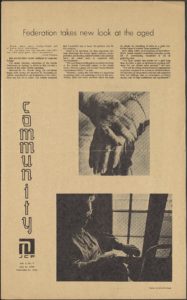 The first known front page of Community – dated September 26, 1973 – can be found in the new Community Newspaper Digital Archives. (Photo provided by the Filson Historical Society)

The new Digital Community Newspaper Archive, an online project that will make Kentucky’s only Jewish newspaper completely and easily searchable for the first time, was rolled out at a virtual program on May 10.
“The Digital Community Newspaper Archive will span half a century and provide an incredible tool for access, discovery, learning and memory,” Richard H.C. Clay, president and CEO of the Filson Historical Society, told the online audience. “We hope you will use it and enjoy it and tell you friends about it, too.”
The Filson and Jewish Community of Louisville (JCL), bolstered by seed money from the Jewish Heritage Fund for Excellence, have partnered for four years to move the project forward. The JCL Archive Committee, co-chaired by Frank Weisberg and Fred Joseph, have also been a major part of the effort.
“We would not be on this journey and we would not be here tonight to see Community on all our screens and have the ability to touch and feel it and explore to our heart’s content if it wasn’t for the partnership that was created at the Filson four years ago,” said Sara Klein Wagner, president and CEO of the JCL.
The archive project is still not finished; issues from 2000 to 2012 must still to be digitized. But issues from the 1970s to 1990s are ready to be accessed. PDFs of the papers from 2013 to the present, posted by Community itself, also have been added to the project.
To put the size and scope of the project into context, Abby Glogower, curator of the Jewish collections at the Filson, said digitization projects of this size are normally not done by historical societies like hers.
“This was new for the Filson,” Glogower said. “Usually, newspaper digitization is something that happens at big research universities and major archives, and that’s because it’s very costly and it takes a lot of work, but we decided to dive into this challenge.”
Much of the May 10 program was devoted to showing participants how the archive, which is free to access, can be navigated.
Users can visit filsonhistorical.org. From the menu bar, they click on collections and scroll down to Jewish collections. From there, they click Jewish Community Newspaper Digital Archives, which takes them to the site where the archive is hosted.
Danielle Spalenka, associate curator of digital projects, demonstrated the archives’ functions and tools used to navigate it. She also demonstrated its versatility by searching Wagner’s name and that of Lewis Cole, each yielding hundreds of hits.
The archive is “fully text searchable,” meaning the papers can be read on the scanned pages or as individual stories.
Further, optical character recognition, the technology that scans printed text, making it readable online, is a “powerful” research tool, Spalenka said, but it isn’t perfect, failing to read certain fonts and characters.
Nevertheless, the final product is still a game-changer for those interested in researching the history of Jewish Louisville.
Community has already used the archive to research a story on the history of artwork exhibited at the JCC.
Clay said the idea for the project came from his predecessor, Craig Buthod.
“It was his plan to digitize the Community as one of his parting mandates when he retired at the end of 2018,” Clay said, “and it is incredibly exciting for all of us at the Filson to see it come to Fruition.”
Other people instrumental in the project were Shiela Steinman Wallace, editor emeritus of Community; Jane Goldstein, Stuart Goldberg and Dr. Morris Weiss, Jennifer Tuvlin, Angie Fleitz and Jennie Cole.
The archive is being hosted by Viridian, the same outfit that hosts the digitized Jewish newspaper repository of the National Library of Israel. Glogower has reached out to the library about adding Community to the repository, which includes Jewish publications from around the world.
While Community is the only newspaper in the archive, Glogower expects back issues of the Kentucky Post & Opinion (P&O) and YMHA Chronicler to eventually be digitized and added.
But there are hurdles, she said. For one, permission must be worked out with the owners of the P&O.
For another, money.
She is optimistic that second hurdle can be cleared.
“I think it can be done,” Glogower said, “so let’s set ourselves a goal and see if we can make it happen.”