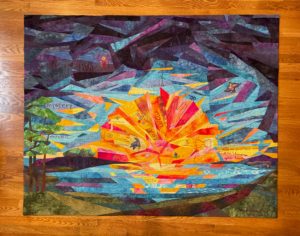 A four-month Jewish Community Center program meant to help people through the darkest days of the COVID-19 pandemic has culminated with a work of art that exudes light.
At the final session of the virtual program Time for Transformation on Monday, May 3, participants were treated to a “reveal” of the program’s crowning achievement: a quilt they worked on with fiber artist Pat Sturtzel, which celebrates their faith in the future.
New Beginnings, as the quilt is called, is a  multicolor 53-by-67-inch work of art depicting a dawning over a lake; several symbols of hope are stitched into the design.
As many as 40 participants contributed embroidered pieces to the project, said Sturtzel, who facilitated the project with artist Lori Sargent.
“We did count 60 embroidered motifs in the quilt,” Sturtzel said. “Lori and I used all the embroidery that was returned to us.”
The quilt was just one project Time for Transformation offered to keep people emotionally and spiritually connected during the winter. Participants also studied journaling (and created their own journal covers), self-compassion and “listening with compassion.” They also shared their visions for post-COVID times.
Besides Sturtzel, jazz pianist Harry Pickens (who played theme music during the reveal of the quilt), Holocaust studies instructor Fred Whittaker and JCC Creative Consultant Jeffrey Jamner also served as project facilitators.
The program followed the idea that to do tikkun olam (repairing the world), people must first take of themselves, Jamner said.
“This was looked at through a Jewish lens,” he said.
Jamner credited Jewish Community of Louisville President & CEO Sara Klein Wagner with the idea for the project.
“Back in November she asked me, ‘What can the JCC offer at this difficult time when we are all exhausted, feeling beat up inside, isolated, scared dealing with the pandemic and social and political upheaval?’” he said. “This [project] grew out of that conversation.”
New Beginnings, which gets its name from Bereshit (Genesis), is not your average quilt.
Its backing is an explosion of blues, purples and reds, all created with a process called snow dying. Literally, snow was used to create the colors.
“We happened to have a good snow during our COVID winter, giving me the perfect opportunity to include this process into the quilt backing,” Sturtzel said. “I wetted the fabric with the fixative, scrunched it and set it on top of a wire rack. I covered it with snow and used a combination of dye powder and diluted dye on top of the snow. As the snow melts, the dye penetrates the fabric in interesting patterns.”
But the front of the quilt is where most of the meaning is found: a sunrise over a pond and trail in the woods, with several fabric symbols of hope stitched in to the tapestry: a dove with an olive branch, a hamza, outstretched hands and the Hebrew word chesed (deeds).
“I wanted to be sure there was a path to represent the journey and we wanted the water for the reflection,” Sturtzel said.
While it took one day to quilt the final composition, the rest of the work to reach that step required four weeks of full-time work.
“The biggest job was creating the design and constructing the composition from the pieces contributed,” Sturtzel said. “Lori and I both drew out design ideas to get us started. We divided up the fabrics returned to us and decided which parts would be used for the sun, the sky, the water. I contributed additional fabrics from my stash to create the trees and the land.”
Ideas for the design came from conversations with group, Sturtzel added.
The Time for Transformation group met for seven sessions over four months, the first being on Jan. 7 – one day after the attack on the U.S. Capitol.
So as a before-and-after exercise, Jamner invited participants at the final session to create two “word clouds” – software-generated designs created with words selected by the participants. The first cloud included words that describe how they felt at the start of the process. Among them: fear, disbelief, sadness, horror, shock, anger and disgust.
“This was not a happy place or a happy time,” Jamner said. “This is where we were on Jan. 6 and Jan 7 when we started.”
One participant, Deborah Denenfeld, felt a sense of “powerlessness” at that time. “By joining this community,” she said she hoped, “I wouldn’t feel so overwhelmed.”
Jamner then asked participants to create a second word cloud, describing their feelings at the end of the Time for Transformation journey. The words they selected included hopeful, community, grateful, inspiring, beauty, light, shemesh (sun) and peaceful.
“It provided an escape, sort of, from the terrible things that were happening in the gloom and the cold of winter,” Susan Glazer said. “I think it gave me something else to do and something to else to focus on.”
Anna Hayden said she appreciated the safe environment for expression. “It’s OK to disagree,” she said. “People are going to listen and not judge.”
Whittaker, who led the compassionate listening part of the project, used the word clouds to summarize what Time for Transformation had achieved.
“We came together with so many different stories, with so many different points of view,” he said, “and we did what we set out to do, which was to gather and create community … with each stitch being our own story, with each stitch being our own words.”
Pickens said the music he played to reveal the quote was meant to elicit different emotions or mental images from each participant.
“What’s one person’s snowfall may be another person’s summer,” he said.
Jamner’s consultancy at the JCC was made possible with a grant from the Jewish Heritage Fund for Excellence.
The exhibiting of the quilt, which was commissioned by the JCC, is still being discussed.
“I hope that it will hang where the community can continue to enjoy it,” Sturtzel said.

By Lee Chottiner Community Editor Ally Doctrow has been making art with Jewish themes for two years, but nothing as intense as this. For her senior project, the 21-year-old recent graduate from the Milwaukee Institute of Art & Design (MIAD) …