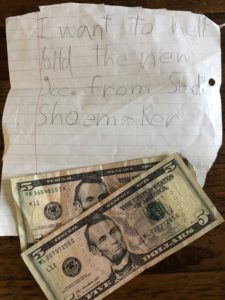 Recently, a note, handwritten with pencil on ruled paper, arrived at the Jewish Community Center for Stacy Gordon-Funk. Here’s what it said:
“I want help bild the new Jcc. From Sadie Shoemaker”
Enclosed were two semi-crisp five-dollar bills – from Sadie’s “tooth-ferry” money.
Gordon-Funk, senior vice president and chief development officer of the Louisville Jewish Federation, has received many donations for the future JCC, but she was especially moved by this one.
“I have been overwhelmed by the generosity of the community, but to receive this note and contribution from 7-year-old Sadie, it’s hard to express my feelings in words,” Gordon-Funk said. “She really understands what philanthropy means… I feel honored she wanted to be a part this campaign.”
Sadie, a 7-year-old first-grader in the Jefferson County Public Schools, literally grew up at the JCC. She started the Early Learning Center (ELC) at age three months and stayed through her Pomegranates year. She made friends there and just feels safe.
“The JCC is like her happy place,” said her mother, Gayle Shoemaker.
Sadie still goes there with her mother every day to drop off her younger sister, Annie, at the ELC. Every time, she watches construction of the new building, knowing it will open soon and that one of her favorite activities, swimming, will be better than ever.
“She talks about the new water pool a lot,” Shoemaker said, “and the slide. She’s so excited.”
Shoemaker works part-time in philanthropy at the Federation, sending out gift acknowledgements and thank you notes. Not long ago, she talked to Sadie about her work and what it means.
“It resonated with her because, about a week or two later, unsolicited, she walked up and gave me $10 from her ‘tooth-ferry’ money.”
The proud mom called her daughter’s act of giving “heartwarming.”
“It meant a lot to me that she had that feeling of generosity within her,” Shoemaker said. “There was no division because she’s a little kid. This is her community, too, and she wants to be a part of it.”
The size of Sadie’s gift – or any gift – is not what’s most important to Gordon-Funk.
“Every gift matters. Every gift counts. In the true essence of tzedakah, charitable giving begins in the heart and soul of the donor translating into making the world a better place.”

D’var Torah Rabbi Shmully Litvin In conversations with friends from around the commonwealth, one question is on everyone’s mind: What will the post- lockdown world look like? Questions such as ongoing mask requirements, mandate power, vaccine schedules are common. When …

By Lee Chottiner Community Editor With COVID vaccination rates hitting record numbers nationwide and all people age 16 and up now eligible for the shots, Louisville’s synagogues are moving forward fast with plans to reopen. The Temple and Keneseth Israel …