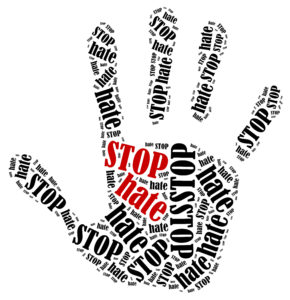 The April 27 release of the annual audit of anti-Semitic incidents in the United States by the Anti-Defamation League showed a sharp jump in cases in Kentucky. Local Jewish leaders are calling for vigilance in fighting all forms of hatred.

Anti-Semitic incidents in Kentucky rose to a historic high in 2020, according to the latest audit by the Anti-Defamation League, according to The Audit of Antisemitic Incidents 2020, which was released Tuesday. The findings are part of a pattern of an increase in hate incidents directed at different minority communities nationwide.
Corey Shapiro, a JCRC member and legal director of the ACLU of Kentucky, said the report reflects a “troubling overall increase in hate and extremism” around the nation.
“We should use this report as a catalyst to increase our coalition work with these communities fighting extremism and hate,” he said.
While anti-Semitic incidents declined by 4 percent after hitting an all-time high in 2019, last year was still the third-highest year for incidents against American Jews since ADL started tracking the data.
While the audit signals a continued threat to Jews in the United States; it also serves as a stark warning that all minority or fringe groups – in particular, Asian and Pacific Islander Americans, Black Americans and immigrants – are at risk from emboldened hate groups and individuals.
“In many ways,” Pasch said, “anti-Semitism is the canary in the coal mine.”
Here in Kentucky, the report showed 19 incidents,, an increase from previous years.
“It’s the highest number of cases reported since we started keeping records in 1979,” said James Pasch, regional director of ADL for Kentucky, Ohio, West Virginia and western Pennsylvania.
Nationally, 2,024 incidents of assault, harassment and vandalism were reported to ADL last year.
Matt Goldberg, director of the Jewish Community Relations Council (JCRC), said the Federation is “deeply disturbed” by the increases.
“Each of these incidents represents Jewish Kentuckians who were horrified to experience the harassment, acts of vandalism and violence directed at them because of their faith,” Goldberg said in a prepared statement. “We hope this report serves as a wakeup call for all in our state that hate against all groups is alive and well and that the time to act is now.”
He urged people to speak up whenever they see something anti-Semitic or against other minorities. “I think of myself as Louisville’s ADL, and I strongly encourage people to contact me if they experience or observe any hate incident.” To contact him call 502-238-2707 or email mgoldberg@jewishlouisville.org.
Broken down, the Kentucky incidents include 12 cases of harassment, six of vandalism and one of assault.
Extremism accounted for much of the jump in Kentucky, with groups and individuals inspired by extremist ideology responsible for six, or 32 percent, of all the incidents – double the national rate of 16 percent.
Five of those six incidents were white supremacist propaganda distributions featuring anti-Semitic content or targeting Jewish individuals or institutions.
Perhaps the most disturbing incident in the audit happened last December in Lexington to a Jewish man at a chanukiah-lighting outside the Chabad of the Bluegrass building near the University of Kentucky. He was run over by a driver yelling anti-Semitic slurs.
But there also have been cases of bullying, religious taunting and graffiti in addition to the spread of extremist literature.
Nationally, the audit found 1,242 incidents of harassment, an increase of 10 percent from 2019. Reported acts of vandalism and assault declined by 18 percent and 49 percent, respectively. There were no anti-Semitic fatalities reported in 2020.
“While any decline in the data is encouraging, we still experienced a year in which anti-Semitic acts remained at a disturbingly high level despite lockdowns and other significant changes in our daily lives and interactions with others,” Jonathan A. Greenblatt, ADL CEO and national director, said in a prepared statement.
Incidents were reported in 47 states and the District of Columbia. Those with the highest numbers of incidents were New York, 336; New Jersey, 295; California, 289; Florida, 127; and Pennsylvania, 101.
Across the river, Indiana reported 17 cases, up slightly from 15 in 2019 and 2018.
The COVID-19 pandemic significantly affected incidents. In some cases, Jews and other marginalized communities were blamed or scapegoated for spreading the virus.
“In many ways Jews across the region and in Kentucky were combatting two out-of-control viruses,” Pasch said.
Once the pandemic became more widespread, incidents of anti-Semitism at schools and colleges dropped precipitously as learning moved online.
But anti-Semitic “Zoombombing,” the intentional disruption of live videoconferences, increased.
In 2020, ADL recorded 196 incidents of anti-Semitic videoconferencing attacks, 114 of which targeted Jewish institutions.
The information in the audit is culled from law enforcement agencies, community leaders, media reports and research by the Center on Extremism at the ADL.
ADL is calling for an across-the-board response to hatred by public leaders and policy makers to improve protections and strengthen hate crime laws. It also advocates for Holocaust and genocide curricula in the schools and support pro-Israel students on college campuses.
“In 2021, we need to be hypervigilant about hate in all of its forms, Pasch said. “There needs to be a holistic approach to dealing with it.”

Want to read it?
To read the executive summary of the ADL audit, visit adl.org/audit2020, where you can also download the complete report.

JCRC Scene Matt Goldberg Elections have consequences. It’s a true statement of which we are reminded after every election. Some candidates run uncontested. Others face formidable opponents in tight races. Every 10 years, the U.S. Constitution calls for a census …