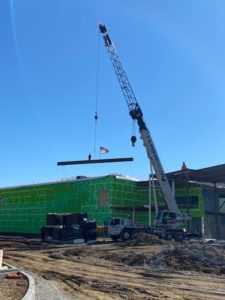 The last beam of the future Trager Family Jewish Community Center — “topped off” with a small evergreen tree, a tradition in the construction industry — was hoisted into place on Thursday, March 4. (Community photo)