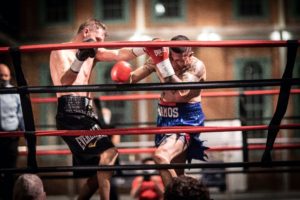 Yuri Foreman jabs his opponent, Jeremy Ramos, during his Dec.5, 2020, bout at the Kentucky Center for African American Heritage in Louisville. The fight, which Foreman won, was his first in nearly four years and is part of the 40-year-old Jewish fighter’s comeback effort to reclaim his super-welterweight title. His second bout back is scheduled for March 6, also in Louisville. (photos by Jared Sher)

In 2005, Yuri Foreman, a young Belarusian Jew from Israel and a struggling boxer, was living in New York – broke.
He worked in the Garment District of Manhattan by day and trained at a Brooklyn gym at night, all the while dreaming of his shot at the title.
It wasn’t easy.
“You mentally, physically, subconsciously hit the bottom, so to speak,” Foreman said. “At that time, I was this close to going back to Israel, just quitting.”
Foreman had been raised secular and never had much interest in Judaism or any religion, but he decided he needed a spiritual vaccination of sorts, to help him through the tough times.
So, he found a free class at a nearby synagogue and decided to give it a try.
It changed his life.
At the first session, he recalled, the rabbi, a 5-foot-5 man with a gentle voice – the exact opposite of the guys he fought at the gym – immediately caught his attention.
“He says that life is like two boxers in the ring, and I’m like ‘what!’” Foreman recalled. “He said that sometimes life is too hard; you find yourself staring at the lights, just like a boxer on his back. Judaism gives you this help, this strength, this inner strength, to get up and continue fighting.”
Foreman was hooked. Not only did he stick with the class, but he began studying with a Chabad-Lubavitch rabbi in 2008 – to become a rabbi himself.
All the while, the lean, determined fighter continued training.
It all paid off in 2009 when he defeated Daniel Santos in a lopsided 12-round decision in Las Vegas to claim the World Boxing Association super-welterweight belt.
That was 10 years ago. Since then, Foreman, who fights under the Israeli flag, has amassed a 35-3 record with 10 knockouts. He was ordained a rabbi in 2014. He also remarried and became a father.
It hasn’t all been good. Foreman lost his WBA belt to Miguel Cotto in a 2010 title fight at Yankee Stadium when he tripped in Coto’s corner and tore his ACL. For the better part of a decade, he fought just a handful of times.
That’s where Louisville comes in. 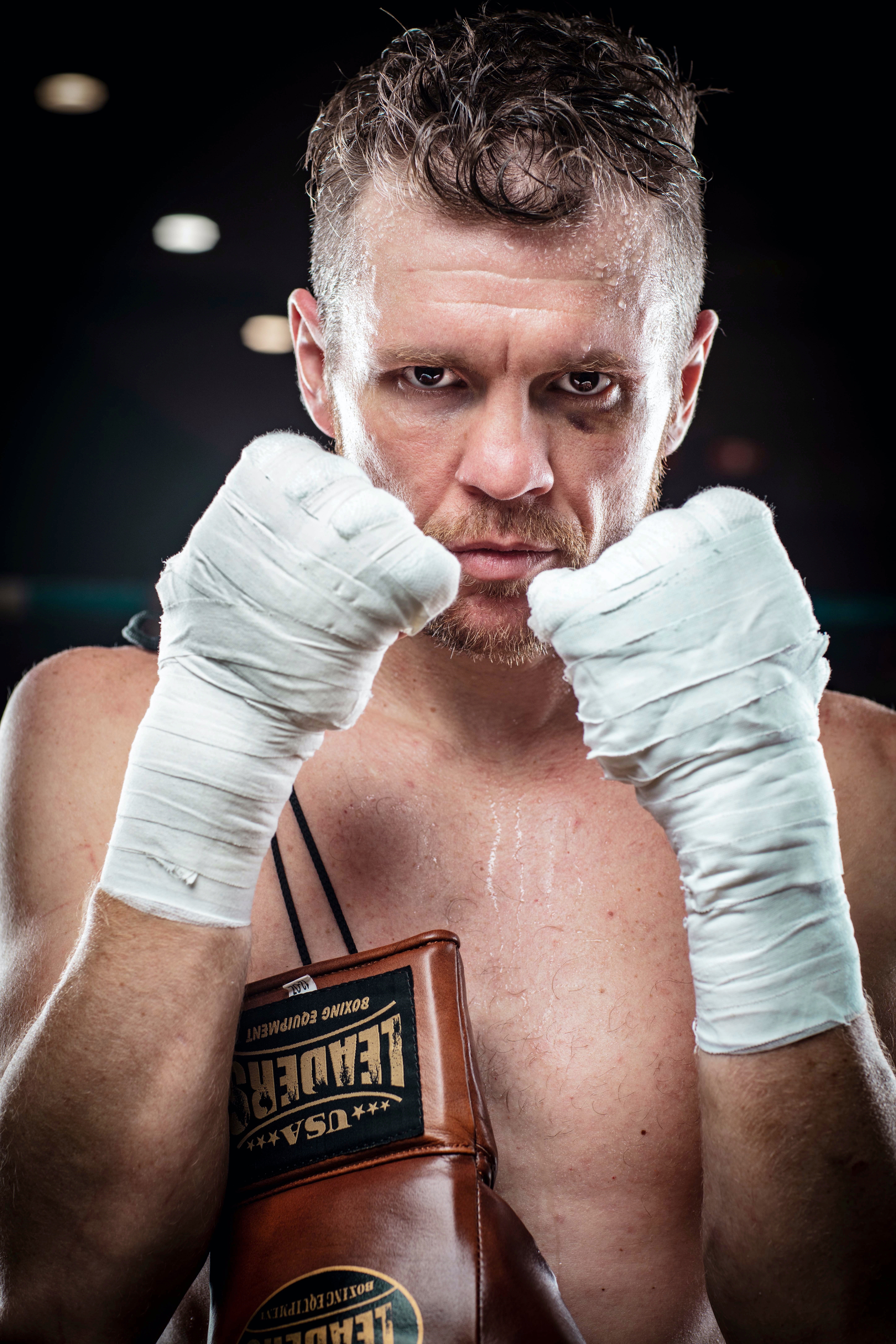 The fighting rabbi is making a comeback. In his first bout in nearly four years, Foreman, now 40, defeated Jeremy Ramos on Dec. 5, 2020, in an eight-round decision at the Kentucky Center for African American Heritage.
He is slated for another fight at the same venue on March 6 against Jimmy Williams, a younger, taller opponent with a longer reach.
If he gets past Williams, he may get another shot at the title.
But why?
“I’m having my second wind at 40,” Foreman said.  “Boxing is something I fell in love with as a kid. Hashem gave me a drive. Hashem gave me mental strength. He gave me quite a few gifts in that sport, in that field.”
He sees his journey in the sport as a source of inspiration for others. “I’m not trying to convince people they should box, but when you are mentally and physically aligned and you have in front of you a worthy goal, anything is possible.”
Foreman’s wife and manager, Shoshana Foreman, said her husband’s quest for a second title is his way to eventually walk away from the sport without regrets.
If he doesn’t [try], there’s going to be a void, an eternal what-if,” Shoshana said.
She is not concerned about Foreman’s age. In fact, at this stage in his development, she sees it as an advantage.
“Really, we’ve cleared out all the toxicity,” Shoshana said. “He’s grown so much spiritually and personally, and with that wisdom, his age works in his favor.”
Judaism informs the way Foreman trains, how he fights, even how he talks about fighting. For instance, unlike Louisville native Mohammad Ali, he doesn’t boast before bouts.
“God willing, I’ll beat Jimmy Williams,” he said.
He doesn’t see anything unusual about a rabbi in the ring. If anything, he says it’s consistent with history of the faith.
“I’m always trying to remind people, especially the Jewish people, that we are a nation of not just priests, but we are also a nation of warriors,” Foreman said. “Our whole history is compiled with a lot of the greatest warriors, starting with King David.
Even Abraham fought, Foreman added. “[He] was not a stranger to the sword.”
Strength is a necessary life component for Jews, Foreman said, something he learned firsthand when his family arrived in Israel from the former Soviet Union. He found it hard to find a gym, so he begam training at one in Kfar Yasif, a predominantly Arab neighborhood.
At first, “they wanted to take my head off in sparring sessions,” Foreman recalled, “but they saw I can fight, and when I fight back, you respect that person.”
Eventually, he and his sparring partners became supportive of one another, understanding that they all wanted the same thing: to be a champion.
He equated what happened in that gym to what can happen with a future peace treaty.
“We supported each other,” Foreman said. “There were no differences suddenly, just a little difference in the mirror, darker [skin], lighter, that’s it.
“The same can happen with living in peace. Let’s not talk about religions; let’s not talk about what Torah says, what Koran says, what the New Testament says. Let’s just think about how we can live harmoniously.”

Want to go?
The Foreman-Williams fight will be held at 7:30 p.m. Saturday, March 6, at the Kentucky Center for African American Heritage. Visit https://bit.ly/3rTzU37 for tickets.  A meet and greet with Foreman for ticket holders will be held at 3 p.m., March 5, at the Peerless Distillery.