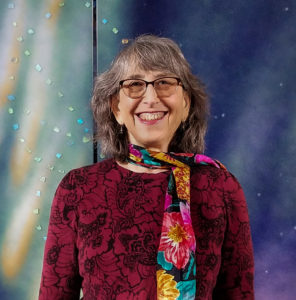 Deborah Slosberg had no idea what was up when she Zoomed in January for Florence Melton School of Adult Jewish Learning’s International Directors Conference.
What was “up” was the Florence Melton Award. Named for the founder of the global Jewish adult education organization, it’s the highest honor it can bestow,
And this year, in a carefully guarded secret, it went to Slosberg, director of the Louisville Melton for the past eight years.
“I was so shocked,” Slosberg said. “Usually, the winners of it know in advance and they have to write a speech; so, this year, they just decided to make it a surprise. Then I didn’t have to write a speech.”
After this award, added Slosberg, who plans to retire in 2023, “there’s nothing else I want to achieve.”
As part of the surprise, Adath Jeshurun, which hosts Louisville Melton, announced that it would underwrite the curriculum for an upcoming class. Developed by scholars at the Hebrew University in Jerusalem, each curriculum costs up to $30,000 to sponsor.
Slosberg’s honor puts Louisville Melton in good company. Last year, the Florence Melton Award went to the Park Avenue Synagogue in Manhattan. Other past winners were the Meltons at Stephen Wise Temple in Los Angeles; Cape Town, South Africa; and MetroWest, New Jersey.
In fact, Rabbi Rachel Bovitz, executive director of Melton, said the program Slosberg runs typically exceeds the offerings of Melton schools – they’re called “communities” – much larger than Louisville’s.
“Under Deborah’s leadership, It’s just been thriving in terms of the number of classes it offers, the faculty she’s built up and the number of classes she offers per year,” Bovitz said.
This year, Louisville Melton has more than 100 students enrolled, filling 12 different classes taught by an eight-member faculty, including Slosberg.
Interestingly, enrollment has not suffered because of the coronavirus pandemic.
“It’s actually gone up this year,” Slosberg said. “People are at home and everything is on Zoom. People can take more courses because it’s just easier to stay in your pajamas, put on a top and Zoom in.”
Even students from other countries are taking the Louisville courses, which are advertised on the Melton website.
Which is why Slosberg believes the Melton program is permanently changed by the coronavirus. “There are things that have come out of the pandemic that I don’t think will go away.”
Louisville Melton has come a long way since Slosberg took it over eight years ago, when it was virtually non-existent.
She had taught at Eliahu Academy for 10 years – a job for which she was recruited by its principal, Barbara Nefouse. When the school closed, she tutored privately for a while before becoming AJ’s adult education coordinator.
In 2013, Slosberg’s husband, Rabbi Robert Slosberg, agreed to bring the dormant Melton – a community program — under AJ’s roof to revive it.
“Gradually, Melton took on more and more of my time,” Slosberg said, and in the past few years it’s just been full-time Melton.”
Today, the program not only offers Melton’s core curriculum, plus electives in Jewish literature and culture, but offerings Louisville Melton develops itself. Rabbi Laura Metzger takes charge of that project.
It also joins in Melton travel experiences to Israel and other parts of the world.
Louisville Melton recently hired an administrative assistant, Bridget Bard, to handle the community’s growing technical end.
Slosberg sees the Louisville Melton as more than a way for adults to brush up on their Jewish literacy. She says it is a gateway to the entire Jewish community.
For example, many of her students were disassociated from organized Jewish life. “Because of Melton, [they] started becoming interested in the synagogue and in other Jewish communal organizations.”
Other students (and this year, two instructors) are not Jewish.
“It builds community,” Slosberg said of Melton. “It builds relationships with the people in the class, which extend to relationships outside of the class, and gets people involved. It brings people to the Jewish community.”
Founded in 1986 with an endowment from the Florence Melton Institute, Melton is considered the largest pluralistic adult Jewish education network in the world, with 50 communities and offices in Jerusalem, Chicago and New York City.
Globally, Melton educates about 4,000 students per year, Bovitz said. Most of its communities are in North America, South Africa and Australia, though thanks to the Internet, students everywhere are now taking advantage of it.
One reason for Melton’s success in Louisville, Bovitz believes, is Slosberg’s success in building relationships with her students.
“She’s always picking up the phone and checking on them in case they don’t make it to class, Bovitz said. “It’s really a labor of love.”