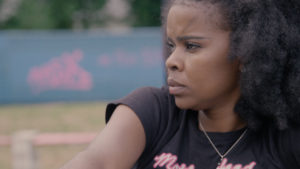 Student Rabbi Tamar Manasseh, who leads an effort to stem senseless killings in her Chicago neighborhood, is the subject of a documentary at this year’s Louisville Jewish Film Festival.

In every generation, according to tradition, Jews have come face to face with Amalek, an enemy first revealed to them in the wilderness during the Exodus.
Jews believe that Amalek has taken many forms over the centuries. Haman was one. Hitler, another.
But to Jews of color, Amalek is not a person, but an ideal.
“It’s racism,” said student Rabbi Tamar Manasseh, a Black Jew from Chicago who combats the effects of racism every day in her work. “In every generation, Black people have had to make war with that, with racism, in this country.”
Following the Jan. 6 attack on the U.S. Capitol by extremists, including white supremacists and neo-Nazis, she believes Jews of all colors are coming to understand that they all face the same Amalek.
“It’s not just a Black problem anymore,” Manasseh said in a recent interview with Community. “It’s not just a complexion problem anymore. It changed on Jan. 6. The new Amalekites are the ones who said ‘Jews will not replace us;’ it’s the ones who stormed the Capitol. That’s the new Amalekite. Those people are going to have kids and grandkids.”
Manasseh, who made national headlines for sitting in a lawn chair on a street corner in Chicago’s Englewood neighborhood, is the subject of a documentary, They Ain’t Ready for Me, which will be screened in February at the Louisville Jewish Film Festival. She and Brad Rothschild, the director and producer, will discuss the film afterwards.
“I was really intrigued by Tamar’s story and her work,” Rothschild told Community in a statement, “but what pulled me in was where she credited her Judaism for her activism. Her personality jumped out at me.”
In 2015, Manasseh founded Mothers Against Senseless Killings (MASK). Frustrated by the shooting death of a young mother trying to break up a fight at the corner of 75th Street and South Stewart Avenue, Manasseh started going to that street corner every day, barbecuing, playing music, bringing games for kids – diffusing situations.
Today, MASK has grown into a community-building organization, fighting violence and hunger, and helping people access city services, educational opportunities and decent housing.
A 42-year-old mother of two who has completed her rabbinic studies at the Israelite Academy in New York (she expects to be ordained once the pandemic subsides), Manasseh said the violence in her neighborhood is a direct result of the racism facing Black people.
That’s why she stresses that MASK, which boasts as many as 300 volunteers, is more than a neighborhood watch group.
“It wasn’t just the idea of us sitting there [on a street corner] that reduced violence, it was the idea of us being able to address the issues that inspire gun violence,” she said.
MASK’s first project was to plant crimson king maple trees on spots where children and adults had been killed. But she realized how little that was when a child told her where he wanted his tree to be planted.
“Sure, this is a beautiful way to memorialize someone,” Manasseh said. “However, no one should be memorializing a 14-year-old, so what do we do to keep them from getting to this point?”
That’s what brought her and others to that street corner – and other street corners.
“We know where violence is going to happen, and if we go there and do these things, we believed that the violence would stop, and it did.”
Through MASK, Manasseh said, she’s living her Jewishness, which she described as ”big tent” and meeting the people where they are, instead of waiting in a synagogue for them to come to her.
“Sometimes you have to bring it to them. And I think there’s a lot more of that starting to happen,” she said. “It’s accessibility; it’s spirituality – understanding of God – that’s accessible to everyone.”
As a result of coming to that street corner every day, she agreed that she is demystifying Judaism for those who know little about it. She said she literally shows people what the holy days are, how mitzvoth are performed.
Most importantly, her neighbors come to know Jews, which strikes a blow at anti-Semitism.
“It’s really hard to be anti-Semitic if you know Jews,” she said.
A real estate agent before entering rabbinical school, Manasseh quipped that she chose this calling because “I can’t cook.”
Seriously, she said women are encouraged to become homemakers in her community, not the male-dominated rabbinate.
“You’re not encouraged to be a leader” if you’re a woman, she said. “You can be a doctor; you can be a lawyer; you can be an astronaut if you want to. You just can’t be a rabbi.”
But she will be. In fact, she said she will be the first woman to be ordained from her academy.
And she hopes she won’t be the last. “I was paving the path for girls like my daughter,” Manasseh said.
MASK, which has already expanded to New York City, Memphis and Mississippi, is poised for further growth. Manasseh hopes to establish chapters from Detroit to Louisiana.
Including Louisville?
“Absolutely,” she said. “There’s a chance I come to Louisville. My best friend is from there… If I’m invited, I’m coming. That’s what I do.”

By Jewish Federation of Louisville As we collectively embark on a new chapter in Jewish Louisville’s history with the opening of the Trager Family JCC this spring, we have a chance to reflect and remember the spirit and intentionality in …

By Lee Chottiner Community Editor In Fauda, the hit Israeli drama series, an elite unit of Israeli Shin Bet agents operates in Palestinian cities, breaking up terrorist rings and thwarting dark operations. But two of its co-stars, Boaz Konforty and …

The Louisville Jewish Archives Committee is seeking help from Community readers to identify photos from its collection, which depicts 100 years of the JCC (formerly the YMHA), Federation and other Jewish institutions. The photos will be retained by JCC, but …