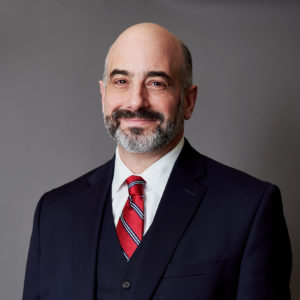 Doron Krakow knows the world will never be the same after the coronavirus.
“Any expectation that the world is going to revert to what it was on March 1, 2020, is a misplaced expectation,” he said, “because people’s patterns of behavior are going to change.”
Still, Krakow, president and CEO of the JCC Association of North America (JCCA), sees a new future taking shape for JCCs, particularly for the Jewish Community Center of Louisville.
In an interview with Community, Krakow said JCCs like Louisville have positioned themselves well to serve a changed world with tools they have developed during the pandemic.
“We have evolved skills, and not only have we evolved them, we’re beginning to work on them collaboratively.”
He also called Louisville’s new $42.5 million JCC campus that is currently under construction – in the throes of pandemic – a cause for “celebration.”
“These capital projects don’t get initiated, undertaken and implemented overnight,” Krakow said. “I think every time a community does what Louisville is doing, it’s a celebration. not only for Louisville, but for the entire community.”
Krakow, whose umbrella organization represents 172 JCCs across the continent, will make a virtual visit to Louisville on Jan. 14, 2021 – the 131st anniversary of the JCC. He will meet with JCC officials and staff. Most importantly, he will speak to donors at an appreciation event.
“I’m coming to extend my gratitude to the people of the community, who have made possible not just what the JCC has been, but what the JCC aspires to be: the central address of the Jewish community of Louisville.”
He gave a shout-out to the JCC’s board of directors and capital campaign committee for the work they have done.
“Leaders roll up their sleeves and lean into the work the community needs in good times and challenging times,” Krakow said. “Louisville’s leadership should feel very proud of the work that they have done and the work they continue to do.”
Since the onset of the pandemic, Krakow said JCCs have developed protocols needed to keep their doors open – temperature-taking, questionnaires – even when other institutions could not.
That enabled some 60 JCCs, including Louisville, to host congregations for the High Holy Days, either in those centers or under tents on their campuses, while their own synagogues were closed.
Virtually, JCCs have created a network of services, attracting massive audiences and making each center an essential portal for anyone seeking to reach the Jewish world.
Krakow ”aspires” for that network to live on after COVID-19 is brought under control.
“Nobody but us has the ability to create an exposure that can draw a million members of our own community, because nobody has contact with a million members of our community.”
The network operates by JCCs partnering with each other, drawing upon each other’s strengths to bring programming to their individual memberships, creating audiences that speakers and events didn’t previously have.
For example, the Atlanta JCC recently partnered with 90 other sister JCCs, including Louisville, to bring their annual book festival to their community and share resources.
“Every JCC had the opportunity to bring A-list authors and speakers to every community,” Krakow said, “and for every ticket you sold in Louisville, half the proceeds stayed in Louisville.”
The JCCA has also enhanced its “Virtual JCC,” (virtualjcc.com) started this year as a service coop but is now transforming into what will become a national platform for the entire JCC movement, providing audiences in the tens of thousands with programs addressing social justice, health & wellness, culture, sports, arts & culture and early childhood education.
“We can create channels that will be able to provide content 24 hours a day, seven days a week on the virtual JCC to be used or tapped into by any JCC or member of the community whenever it suits them.”
In many cases, he said, the people accessing JCC, physically or virtually, are not Jewish.
Aside from providing “a greater and stronger Jewish community,” Krakow said JCCs, including Louisville, increasingly have a parallel purpose as friends and neighbors from other faiths become members.
Krakow sees this trend as a “responsibility.”
“We need to make sure they understand that that’s the Jewish community providing for them and that our JCC is an embassy of the Jewish community to those around us. It informs the way they see us; it informs the way we see them.
“There is no place that sees more of neighbors and friends from outside the Jewish setting than the JCC,” he continued. “Nobody does it more, so that’s a tremendous responsibility.”