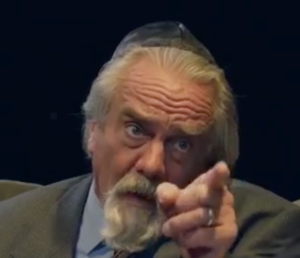 The show must go on in the Jewish theatre, but David Chack has just given the old saying new meaning for the 21st- century.
The ShPIeL Performing Identity, a theater project that has staged several Jewish-themed plays in Louisville, was all set in March to open its latest production, Imagining Heschel, the story of the 20th century rabbi and humanitarian, Abraham Joshua Heschel. An all-Louisville cast had been assembled and rehearsals were ready to go.
Then came COVID.
“We were prepared to start actual physical rehearsals … then all the COVID stuff started to emerge and then we went into lockdown,” recalled Chack, ShPleL’s artistic director. “We really weren’t sure what to do.”
Chack soon became very sure of what to do: Acting on an idea from a friend and filmmaker in Chicago, he turned the play, which he produced, directed and adapted, into “theater on film.”
Eight months later, Imagining Heschel: Selections from a Play, is set to debut Dec. 1 online on a pay-per-view basis.
The film, which will run through Dec. 20, can be accessed through the website of the Louisville-based Bunbury Theatre, which collaborated with the ShPIeL to put on the production.

NBC reporter Carol Radnor, played by Lindsey Palgy, interviews Heschel in Imagining Heschel: Selections From a Play. Palgy is the only Jewish actor in the cast.

The title of the one-hour show, which Chack shortened from two hours, now has the subtitle Selections from a Play. It was added at the request of the playwright, Colin Greer, making clear to audiences that they are not seeing the complete production.
But Chack said cutting the run time also makes sense for a time when everyone is pushed online for so many reasons, taxing their attention spans.
“What you are seeing is an adaptation, so it can be on film,” he said, “so it won’t be a strain on the people who are watching it.”
Theater on film is not an unheard-of genre. It has been done to great success with such productions as Newsies and, more recently with Hamilton.
But there’s one big difference this time: Hamilton was a $20 million production, Chack said. “I had $15,000; that’s it, but I had to raise it from scratch.”

Heschel has many difficult discussions about race and justice with his driver, Jonah, played by Jason Maina.

He’s not complaining, though. In fact, he’s understandably proud of the work.
Shot at the Commonwealth Theatre Center and at the studio of Videobred, the Louisville-based company that filmed the production, Imaging Heschel: Selections From a Play, highlights moments from the rabbi’s life and work.
The main story line follows Heschel’s respectful, though sometime tense, interaction with Cardinal Augustin Bea on Nostra aetate, the historic Vatican declaration intended to repudiate anti-Semitism and usher in a new relationship between Catholics and Jews. Heschel agrees to go to Rome to serve as an advisor on the Vatican talks, but only after he travels to Alabama to join Martin Luther King on his historic Selma-to-Montgomery march.
In fact, the film/play deals more with Heschel’s efforts at the Vatican than with the civil rights movement in America, said actor Tom Luce, who portrays him. Interesting, he said, in that Nostra aetate, also known as Vatican II, didn’t resolve all the differences between Catholics and Jews, as Heschel had hoped.
There’s a lesson there, said Luce, who is not Jewish and knew little about Heschel before taking the role.
“We all need to keep working toward the end where we can achieve understanding and respect for each other’s different religions, different point of view,” he said. “Whatever it is, it takes work and here’s a man who dedicated his entire life to that.”
More dramatic is the rabbi’s relationship with his driver, a young Black man named Jonah, a fictional character, who has decided to join the Army and go to Vietnam – a decision that dismays Heschel. Jonah, played by Jason Maina, an 18-year-old Louisville actor, is angered by the treatment of Blacks in America and argues with Heschel about everything from God to violence to racial justice.
“For me Jonah does definitely act as a source of internal and external conflict for Heschel,” Maina said. “I had never seen him as Heschel’s conscience, which is an interesting take as he plays such an influential role in it as seen in the dream sequence. For me, Jonah represents a sort of home for Heschel in a literal and metaphorical sense.”
In the backdrop of both storylines is a world on fire, struggling with the civil rights movement, anti-Semitism and fallout from the Holocaust.
Heschel is at the center of it all.
“Within the main story is the questioning and the whole investigation of what does it mean to be a person of faith and also to protest the world around us,” Chack said. “What are we really achieving? Have we achieved anything? This a question that came up for Heschel so much.”
Greer, a playwright and historian, wrote Imagining Heschel in the 1990s, looking back at the turmoil of the ’60s. But Chack, who worked with Greer for five years revising the play, infusing more Jewish touchstones, said its message is just as meaningful today as the country grapples with violence against Blacks, the backlash against migrants and threats to women’s rights.
“It’s like everything he was writing about has come true,” he said. “We’re back in the streets.”

Want to go?
Imagining Heschel: Selections from a Play can be accessed at
bunburytheatre.org. Tickets are $15 ($10 for students) on a “pay-per-view” basis. Group sales can be arranged by contacting bunburytheatre@gmail.com. The film wouldn’t be possible without a $30,000 grant from the Jewish Heritage Fund for Excellence, which Chack is using for this project and others in the spring.