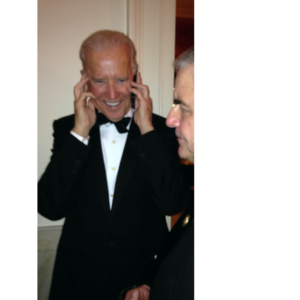 Then-Vice President Joe Biden shares a phone chat with former U.S. Sen. Marlow Cook, R-Kentucky, during the 2014 White House Christmas Party. It was the last time the two men, who were friends from their days in the Senate, spoke before Cook died weeks later. (photo provided by U.S. Rep. John Yarmuth)

U.S. Rep. John Yarmuth knows that the compassion President-elect Joe Biden showed during his campaign is genuine. He has seen it up close and personal – twice.
And both times involved a Kentuckian.
The first time came during the 2013 Congressional Picnic on the south lawn of the White House. Biden and Yarmuth were chatting when the talk got around to former U.S. Sen. Marlow Cook, a Kentucky Republican and a friend of Biden’s when both men served in the Senate.
Yarmuth, who had served on Cook’s staff, told the then-vice president that his old boss, 85 at the time, was having some “physical limitations,” so Biden asked if he had Cook’s number.
No sooner had Yarmuth taken out his phone and scrolled down to the number did Biden take it out of his hand and press “call.”
“He’s standing on the south lawn and they have a four- or five-minute conversation, and it ends with ‘love you, love you,’” Yarmuth recalled.
When Biden handed the phone back to Yarmuth, Cook told him, “You made my year.”
The same thing happened a year later at the White House Christmas party. Again, Biden and Yarmuth chatted. Again, the talk got around to Cook, whose health was seriously failing by then. Again, Biden asked if they could call him. He and Cook talked for about 10 minutes that time amid the din of a crowded party.
“That’s the last time he ever talked to him, because Marlow died not too long after that,” Yarmuth said. “But that’s who he (Biden) is; he’s just this wonderful, thoughtful, very human person.”
Yarmuth and former Louisville Mayor Jerry Abramson have both seen the personal and professional sides of the incoming president. Both shared their impressions in separate interviews with Community.
For Abramson, who served in the Obama administration as director of intergovernmental affairs, Biden’s sense of humor stands out.
He was working in his office in the West Wing of the White House one day when in walked Biden.
“He sat down in front of my desk and said we should spend more time together,” Abramson recalled. “I said, ‘Mr. Vice President, if you want to spend more time together, I’m certainly willing and would love to, but why?’ He said, ‘Because we’re the two oldest guys in the West Wing.’”
Biden was 74 at the time; Abramson, 69.
Abramson worked closely with Biden during his White House days.
“Any time he was going to give a speech to an association of mayors, of governors, of county executives, we would meet, along with his speech writers, and talk through issues of importance to those groups,” said Abramson, who frequently traveled with the vice president aboard Air Force 2.
He sees Biden as well-suited to be president now, when health, economic and environmental crises grip the country and the world.
“As he enters office, his in-box is full,” Abramson said. “He’s going to have to multi-task in a major way.”
He described Biden as an engaged leader, calling him an “excellent listener” and “very inquisitive” during their meetings together. 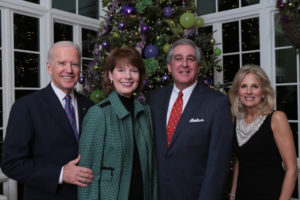 Jerry and Madeline Abramson with then-Vice President Joe and Dr. Jill Biden during a holiday party at the U.S Naval Observatory – the official residence of the vice president – December 2015. (photo provided by Jerry Abramson)

“He would not be a micro-manager, but he would be very comfortable in a collaborative relationship with his staff,” Abramson said, “and ultimately, when decisions were made, to turn to his staff and ask them to coordinate accordingly.”
Abramson and Yarmuth had front-row seats to major issues that Biden worked on, including those of special interest to Jews.
Both men described Biden as a strong supporter of Israel, though there were disagreements.
“He, along with President Obama, were very much opposed to the expansion of the settlements, and he, as well as President Obama, were strong supporters of a two-state solution,” Abramson said.
Biden also backed the Iran Nuclear Agreement, which Israeli Prime Minister Benjamin Netanyahu strongly opposed.
Yarmuth, one of a core group of congressmen to support the nuclear deal, said he and his colleagues got White House briefings about the agreement, some conducted by Biden himself.
“He had no conciliatory inclinations with Iran,” Yarmuth said. “He just deeply believed, as did Barack, that this was the best way to demilitarize the region, and that it was in Israel’s benefit to do it.”
Yarmuth believes Biden will be in a good position to broker the elusive peace agreement on the West Bank. “He has credibility with both the Palestinians and the Israelis.”
He also predicted that Biden will be good on many domestic issues that Jews care about: church-state separation and refugees among them.
Even with divided government, Abramson said Biden, who spent nearly 40 years in Congress and has a history of working with Senate Majority Leader Mitch McConnell, has the skillset to reach compromises.
“Every time that President Obama got into difficulty with the Republican-led Senate, Joe Biden was the person sent to the Hill to work out a resolution,” he recalled. “As a result, resolution of many issues were worked out.
One personal issue for Biden then, and likely after he becomes president, remains research to end cancer, the so-called “moonshot.” Biden’s older son, Beau, died from brain cancer.
The president-elect headed a task force on cancer in the last year of the Obama administration, presenting findings that addressed transforming research and the “research care ecosystem” (prevention, diagnosis, treatment). The effort, renamed Cancer Breakthroughs 2020, still exists, focusing on immunotherapy.
“That’s still out there as a personal concern for him,” Abramson said.

JCRC Scene Matt Goldsberg The 2020 election, which feels like it has gone on forever, should nevertheless be a source of pride for Americans, who exercised their right to vote in staggering numbers. This election saw the largest turnout in …