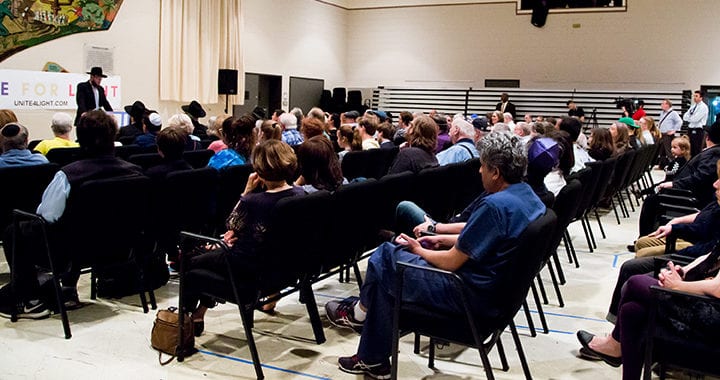 Rabbis Shlomo and Chaim Litvin chant Psalm 20 at the Tuesday’s Unite for Light program, a response to the synagogue shootings in Poway, California. The psalm was offered as a prayer of healing for those wounded in the Poway shootings. (Community photos by Jessica Budnick)

Standing beneath a giant Holocaust mural in the J auditorium, Rabbi Avrohom Litvin admitted that he had been wrong about the resurgence of anti-Semitism.
A crowd of about 150 people — gathered in the wake of the weekend shootings at a synagogue in Poway, California — listened as Litvin, regional director of Chabad of Kentucky, recalled a recent visit to Lexington when the president of Temple Adath Israel asked him about anti-Semitism.
“I’m sorry to admit, I said I didn’t think anti-Semitism was as bad as people say,” Litvin recalled.
Now, two synagogue shootings – one in Pittsburgh, one in Poway – have happened within six months of each other.
“I was wrong,” the rabbi said.
Litvin’s talk capped an hour-long program Tuesday, called Unite for Light. The program commemorating the victims of the Poway shootings, including Lori Gilbert-Kaye, who died after she jumped between her rabbi and the gunman, offered ways to turn the darkness brought by the shooting, and many other shootings, into light.
According to the Anti-Defamation League, there were 1,879 anti-Semitic incidents in 2018, down from 1,986 the previous year, but anti-Semitic assaults more than doubled from 17 to 39.
“If no one does anything about it, it’s probably going to get worse,” Litvin said.
Sara Klein Wagner, president and CEO of the Jewish Community of Louisville, which co-hosted the event with Chabad, reminded the crowd just how much darkness there has been recently.
The just-concluded Passover holiday, she said, was the first since the Pittsburgh shooting, the New Zealand mosques attacks and the burnings of three historically black churches in Louisiana. The Sri Lanka church bombings happened on Easter Sunday — the second day of Passover — and Pesach concluded with the Poway attack.
But the same mural Litvin and Wagner stood under, titled “Darkness to Light,” segues from death camps scenes to the birth of Israel.
So Litvin also segued, suggesting two ways people can bring more light into the world: Louisville Metro Mayor Greg Fischer asked the Unite for Light audience to “love more … be more compassionate … and bring the light” as their response to the shootings.

He asked everyone to take out their phones and go to unite4light.com, a website Chabad created, and pledge to perform a good deed or “act of light.”
“I’m not asking people to contribute a lot of time, I’m not asking you to contribute a lot of money, just a good deed,” Litvin said. “You pick the good deed, just make the world a better place.”
So far, the website has collected more than 8,000 pledges. Litvin expects that number to reach  at least 13,000.
To help things along, Chabad set up a table at the back of the hall to give out “Shabbat Candlelighting Kits” – two small candles and matches in a matchbox.
Litvin also pledged to spend much of the coming months meeting with people, educating them on anti-Semitism and garnering ideas for combating hatred. He started Wednesday when he met with Lisa Gill, the Jeffersonville, Indiana, councilwomen who used the “Jew ’em down” slur during an April 15 council meeting.
Several other speakers added their voices to the program.
Louisville Metro Mayor Greg Fischer, visibly frustrated to be speaking at so many rallies following shootings, urged to crowd to “love more … be more compassionate … bring the light.”
Rabbi Shmuly Litvin, the moderator for the event, reminded everyone of the Jewish teaching that saving a life is like saving a world. Conversely, he said taking a life is like taking a world.
Chabad Rabbis Chaim and Shlomo Litvin read Psalm 20 in Hebrew while Crescent Hill Baptist Church Rev. Jason Crosby read the Psalm 23 in English.
Cantor David Lipp read a portion from the Book of Isaiah, prophesying a messianic age — the same haftorah that Chabad of Poway Rabbi Yisroel Goldstein was set to read moments before the shootings – and he chanted Oseh Shalom, a prayer that asks God to bring peace “to us and to all Israel.” The audience spontaneously joined him.
Chabad darkened the hall to play two videotaped messages from Goldstein, one coming less than 24 hours after the attack. The Poway rabbi, who lost a finger in the shooting spree, described how he “locked eyes with the terrorist,” and how his granddaughter watched him bleed.
But he also rallied the troops, shouting after the incident, “Am Yisrael Chai!” (the people of Israel live).
He urged Jews everywhere to fill the synagogues this coming Shabbat.
Gov. Matt Bevin videotaped a message for the program and Deputy Attorney General J. Michael Brown spoke for Attorney General Andy Beshear.
Dr. Muhammad Babar, a representative of the local Muslim community, lamented how people who “share the same DNA” as the rest of the human race can still hurt people, Almost shouting, he made clear that no faith, gender or people is superior to the others. Cantor David Lipp read from Isaiah and sang Oseh Shalom at the program.

Rabbi Michael Wolk, speaking for the Louisville Board of Rabbis and Cantors, said the type of high security used for years at European synagogues, is making its way to America. Nevertheless, he urged everyone not to give in to fear, maintain a welcoming atmosphere at their houses of prayer.
It was their responsibility, he told the crowd, that the synagogue be a “gate to God.”