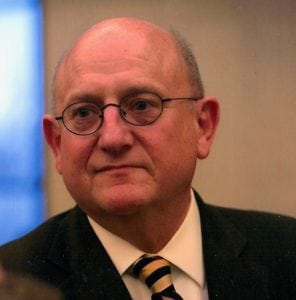 Ira Forman, a former U.S. State Department envoy and Jewish Democratic political activist, will assess the rise of domestic and global anti-Semitism during an appearance at The J Tuesday, February 20, starts at 6:30 p.m.
During his program, titled “Hate Affects Us All: Confronting Worldwide Anti-Semitism,” Forman will talk about his meetings with world leaders about the worsening treatment of Jews in their countries.
He also will address what the United States is doing to confront anti-Semitism and how it relates to the domestic rise in incidents that target Jews and their institutions.
Forman was appointed the State Department’s Special Envoy to Monitor and Combat Anti-Semitism (SEAS) in 2013. He served in that role until the end of the Obama administration in January 2017.
Earlier, Forman served as the Jewish outreach director for the Obama for America campaign from 2011 to 2012.
But he is perhaps best known for the 15 years he spent as executive director of the National Jewish Democratic Council.
Forman graduated Magna Cum Laude in government from Harvard University and received a master’s of business administration from Stanford University’s Graduate School of Business.
From 1977 to 1981, he worked for the American Israel Public Affairs Committee as a legislative liaison.
Currently, Forman is a senior fellow at the Center for Jewish Civilization, School of Foreign Service, at Georgetown University.
He co-edited and wrote for the reference book, Jews In American Politics, and has written articles and opinion pieces for the Encyclopedia Judaica, The Washington Post, The Jerusalem Post and The New York Jewish Week.
Cost of the program is $18. Donations also are appreciated so that The J can continue to provide quality, thought-provoking programs. Click here to register.