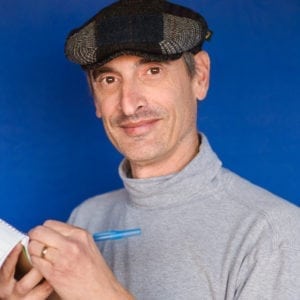 If you sleep well at night, Fr. Patrick Desbois wants to change that.
Not that the French-born Catholic priest is opposed to a good night’s sleep, but after 15 years of traveling to towns, villages and farms across the former Soviet Union, interviewing some 5,700 elderly men and women to locate 2,300 extermination sites for over 1.2 million Jewish men, women and children who were shot to death, he fears many people have become complacent or, worse, ignorant about what occurred.
He wants people to be as disturbed by Holocaust denial as he is … to lose a little sleep.
“Today, [Holocaust] deniers are very strong across the nations,” Desbois said in a phone interview from Paris. “I wanted to show the evidence of the crime, so you cannot deny the crime.”
“It isn’t a belief,” he said of the Holocaust. “It was a crime.”
Desbois, 62, is the co-founder and president of Yachad-in Unim, a French organization that locates the sites of mass graves of Jewish victims of Nazi mobile killing units like the Einsatzgruppen in Ukraine, Belarus, Russia, Poland, Moldova and Lithuania from 1941-1942. (Other Nazi groups and their auxiliary units carried out their own shootings.)
His 2008 book, The Holocaust by Bullets, which won the National Jewish Book Award, drew international attention to the Holocaust by shootings in Eastern Europe that had been long overshadowed by Nazi death camps.
Since then, the cleric has been featured twice on 60 Minutes; he has traveled around the world speaking about his work; and he just won the 2017 Lantos Human Rights Prize from the Lantos Foundation for Human Rights. 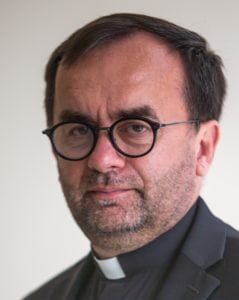 His latest book, In Broad Daylight, chronicles in disturbing detail how the people in the former Soviet Union, young and old alike, were complicit in the killings.
He describes how villagers were “requisitioned,” much like a truck or warehouse, and put to work digging mass graves and driving Jews to the execution sites, laying planks across the pits that naked victims were forced to walk out on before being gunned down. The locals were even made to cook food for the killers and play music as the shootings happened.
Babies were shot and tossed in the graves, according to these witnesses. Women were raped. On one occasion, Jews were made to dance and were savagely beaten if they stopped.
The locals saw it all, watching from their rooftops, trees and even closer than that. Many made the sign of the cross over the mass graves after the shootings.
“It was like a show,” said Desbois, speaking in his thick French accent. “It’s why we have so many witnesses today. People were not afraid [of also being shot]; schools were closed. Children came to watch…. It’s why we call [the book] In Broad Daylight.
But he never passes judgment on them. “These are simple people.”
Nevertheless, some witnesses show little remorse as they meticulously recount their roles in front of Desbois’ camera crew; some reluctantly answer questions, others doing so willingly, as if they have been waiting for just this chance.
Still others share surprising stories almost as an afterthought, like one man who added as Desbois’ crew wrapped up the interview, how he hid five Jews behind his kitchen wall.
An endowed professor of forensic study at Georgetown University, it isn’t only academic interest that keeps Desbois returning to the FSU, looking for more witnesses and more graves, and it isn’t just his commitment to fight anti-Semitism.
It’s personal for him. Desbois’ grandfather was a prisoner of war, interred in a camp in Rawa Ruska, a small town in western Ukraine where shootings also took place.
His grandfather spoke little of what he saw, but when Desbois visited Rawa Ruska in 2002, befriending the mayor – Yaroslaw – he learned of the mass shootings there, saw the killing fields and listened to witnesses tell their stories.
“When the evening had fallen, I found myself alone in the forest with Yaroslaw,” Desbois wrote in his latest book, “It all could have ended there…. I started toward the dirt road where our car was waiting for us. That’s when Yaroslaw pronounced these words: ‘Patrick, what I have done for one village, I can do for one hundred villages.’”
He has been on a quest ever since, finding and chronicling graves while the witnesses who can pinpoint them are still alive.
By his reckoning, Desbois believes 1 million Jews remain unaccounted for.
Asked how he stays sane, the cleric quipped that he’s not sure he is.
It’s lonely work, he admitted. “I have much less friends than before.”
The same goes for his team of investigators and translators who do much of the legwork in the region.
“You cannot [do this job] without sacrifice,” Desbois said. “There is a price to pay. I only work with people who don’t sleep well. People who sleep well cannot work with me.”
He plans to keep doing this work until the job is done, noting he has the blessings of the last two popes to keep at it.
And if they do their jobs well, more people will find it harder to get some sleep, especially American Jews.
“I try to wake them up and say don’t dream because you are in America,” Desbois said. “Most of the Jews today are not safe on the planet. … Don’t wait to have a situation in America.”
He pointed to Charlottesville and the of Boycott Divestment Sanctions (BDS) movement on college campus as signs that American Jews are not immune from resurgent anti-Semitism.
“The deniers are very strong in America and they move a lot of mountains…. I am very proud of American Jews in certain ways, but I also want to wake them up.”