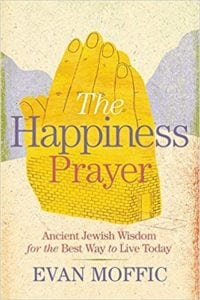 The Happiness Prayer, the first book by Rabbi Evan Moffic, is a how-to book to achieve happiness in times of stress.
Not only that, it is a helpful handbook for rabbis and other spiritual leaders for interacting with troubled congregants while finding peace in their own lives.
This is no truer than in the author’s own case.
Moffic, a Reform rabbi from suburban Chicago, writes about how, upon becoming the lead rabbi of a “large and historic congregation” by age 30, the challenges he faced proved daunting.
“Two thousand people turned to me for help with the pains and tragedies of life – broken marriages, problems with their children, the deaths of parents and grandparents, and much more,” he wrote.
He also had to grapple with his own personal crises.
“I also lost a close friend – a medical resident with everything going for him – to suicide. My wife and I had just had a baby, and it had not been an easy pregnancy. Our oldest child had medical problems. Nothing was the way it was supposed to be.”
So the young rabbi turned to his tradition for comfort; specifically, Eilu Davarim (“These are the Words”), which Moffic calls “The Happiness Prayer.” It’s a 10-verse prayer that has been part of Jewish worship for hundreds of years, and it forms the outline for his book.
“I realized the words I was saying were not directed only toward God,” he wrote. “I was also saying them to myself. And the prayer saved me. It gave me a new perspective. It infused vitality into my leadership and family. It renewed in me the joy of learning and teaching and serving as a moral and spiritual guide. People now call me ‘the smiling rabbi.’”
That’s what the prayer did for him. Here’s why it can work for others:
“The prayer works because it illuminates a new approach toward happiness. The modern English word happiness comes from the Middle English hap, as in happenstance and haphazard. The origin suggests that happy life is a result of randomness and luck.
“The Hebrew word for happiness – simcha – demands intention,” Moffic added.
The book addresses what the prayer teaches: honoring those who gave life, being kind, lifelong learning, inviting others into your life, being there for others, celebrating good times, supporting yourself – and others – in times of loss, praying with intention, forgiving, looking inward and committing.
A light, yet inspiring read, it’s worth picking up.