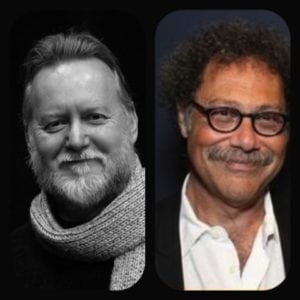 Juergen K. Tossmann of the Bunbury Theatre (left) and David Chack of the ShPIeL Performing Identity will collaborate on theater projects for the next two years. (photo provided)

Two edgy theater companies – one here, one in Chicago – will join forces over the next two years to develop productions and a summer “institute” to explore Jewish and other ethnic identities in Louisville.
Bunbury Theatre in Louisville and ShPIeL-Performing Identity in Chicago are the recipients of a two-year grant worth $70,000 from the Jewish Heritage Fund for Excellence. They will use the money to stage two productions each year.
“We hope that this project will expand the reach of stories connected to the Jewish experience and promote multicultural understanding,” JHFE Executive Director Jeff Polson said in a prepared statement.
New plays or productions already developed by both companies could be staged here.
Bunbury already produces plays with Jewish characters and Jewish themes, said Juergen K. Tossmann, artistic director of Bunbury Theatre.
“The community is in some danger of losing people, and I think we want to invigorate it, to bring focus to it, and do it in a theatrical way,” he said.
The collaboration will begin early next year when Bunbury presents RED, a Joshua Logan production about the life, work and art of Mark Rothko, RED will run from February 16 to March 4.
David Chack, artistic director of ShPIeL-Performing Identity, said the collaboration is a timely response to the spike in prejudice that’s gripping the country.
“Today’s rise in anti-Semitism, white nationalism, and attacks against Jews and other ethnicities, races, religions and genders demonstrate that this is needed more than ever,” he said.
At the core of the collaboration, he said, is “intercultural sharing,” which explores identities of various groups and how they interact with one another. Hamilton, which casts multi-ethnic actors in the roles of actual historic figures, is an example of intercultural sharing.
“People will come and look at their identities and how they merge with others,” Chack said.
The Bunbury is already known for exploring ethnic identity on the stage. In December, it put on St. Nickaklaus and the Hanukkah Christmas, the story of an aging Jewish actor and Holocaust survivor who tries to come to terms with his failing memory and his relationship with his adopted African-American son, estranged daughter and “smoked-up” son-in-law.
The Bunbury-ShPIeL collaboration has been in the planning stages for some time.
“Juergen and I have been talking for the past three years about doing something here,” Chack said. “He was involved in some productions that I brought for my theater project in Chicago.”
The directors approached JHFE this past March with their proposal.
To do this kind of theater, actors must “go deep” and explore their own identities, Chack said.
That’s why the grant also includes an institute component – a summer retreat for performers to work on their skills related to intercultural sharing.
“We want to work with theater artists of all backgrounds, Chack said. “That’s why this is so exciting. Unfortunately, we get siloed in our cultures and identities.”
The collaboration includes a community component.
“We’ll also work with the community to bring them into the process. This is why we got the grant.”
One way to do that is to strip away the barriers between the production of the play and opening night. Chack said Bunbury recently did a closed reading of a play that could soon be in production, but members of the various ethnic communities here were invited to watch.
“We want to bring people in before the work even begins,” Chack said. “We want to pull back the curtain and reveal the process, so the whole community is involved in the process.”
ShPIeL-PERFORMING Identity is a theatre and performance project with roots in Jewish performance – producing, developing and being a catalyst for works in a transcultural world.
In addition to ShPIeL, Chack is a professor of theater at DePaul University and executive director of the Association for Jewish Theatre.
He said theater is a great way to pump up Jewish identity.
“I mean, Broadway theater. C’mon! Where else are you going to find so many Jews in one place?”