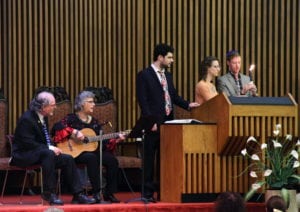 Rabbi Gaylia R. Rooks of The Temple, surrounded by her family, smiles as she accompanies them on the guitar during the Havdalah service at her December 3 retirement banquet. Rooks, who will now be known as “rabbi emerita,” served the Temple for 30 years. (photo by Jay May)

Lighting the Havdalah candle from the bima of The Temple – “home,” as Rabbi Yael Rooks Rapport called it – she described how the service represents a spiritual separation, a chance to build a better world in the week to come.
“I can’t imagine a more beautiful and sacred moment to celebrate my mom,” she said.
Yael, her husband, David Moser, her brother, Lev, and their father, Rabbi Joe “Joshua” R. Rapport, led the capacity congregation of 300 Saturday, December 3, in the service as their mother and wife, Rabbi Gaylia R. Rooks, accompanied on guitar.
It was the start of an emotional evening celebrating Rooks, who is retiring after 30 years of service to the Temple.
The evening included a banquet, video presentation and proclamations from U.S. Rep. John Yarmuth and Louisville Metro Councilman Brandon Coan.
(Coan delivered his proclamation for Louisville Mayor Greg Fischer, who signed it. Yarmuth, noting that congressmen have no authority to make proclamations, nevertheless declared Saturday – unofficially – “Rabbi Gaylia Rooks Day.”)
Though she is officially a senior rabbi at The Temple until June, she will spend her last months on sabbatical.
Rooks is leaving behind a historic legacy. The first woman rabbi in Kentucky, she has served the congregation along with her husband since 1988.
She became a leader in the field of interfaith relations, a fact she cemented when she responded with her congregants to the defacing of the Louisville Islamic Center in 2015, working with others in the community to wash away the spray-painted Stars of David and anti-Islamic slurs.
She has committedly volunteered for the WHAS Crusade for Children, appeared regularly on The Moral Side Sunday morning talk show, and overseen liturgical music at The Temple, working closely with the Shir Chadash choir and its director, Louie Bailey.
For her achievements, Matt Schwartz, president of The Temple, announced that Rooks will have the title “rabbi emerita” from now on, and WRJ/Sisterhood President Sandy Braunstein said the annual women’s seder, which Rooks started, is being renamed in her honor.
The crowd was a cross-section of Louisville religious leaders – Jewish, Christian, Muslim – not to mention leaders in the city social service sector, all of whom have been profoundly affected by Rooks’ contributions. She singled out Dr. Gene March, past head of the doctoral program at the Louisville Presbyterian Theological Seminary, “without whom I never would have gotten my doctorate.”
She added, “I learn from all of you, especially my interfaith friends.”
A video was played showing highlights from Rooks’ career and recorded well wishes from friends and colleagues. One of them was Rabbi David Ellenson, former president of Hebrew Union College-Jewish Institute of Religioun, who spoke glowingly of Rooks, one of his former students.
But the evening belonged to Rooks, who spoke last.
She paid tribute to her husband for his “gentle encouragement for what I might become,” and her children. (“Everything that is gentler, kinder and more loving in me, I learned from you.”)
She said each person who was present, along with those who called, wrote and texted, was special to her in a different way.
Reflecting on the way she spent her life, Rooks asked – in jest – why on earth anyone would want to become a rabbi.
The answer, to her, is obvious.
“What more fulfilling way could there be for someone to spend a life? I became a rabbi because the rabbi gets to be there when life seems to be coming apart or coming back together.”
Being a rabbi, she continued, is an honor.
“There are entrances to holiness everywhere – the birth of a child, the bar mitzvah of a son, the ordination of a daughter, weddings, funerals, festivals and feasts,” Rooks said. “That’s one reason I wanted to become a rabbi. People allow me the sacred opportunity to experience with them precious entrances to holiness.”
“Called to the rabbinate” in the 10th grade – before Sally Priesand became the first woman rabbi in America – and ordained herself in 1984, Rooks said she had been privileged to serve a congregation where she been “paid to be a mensch.”
“People expected me to be caring and righteous. They entrusted me with tzedakah, and I was blessed to be part of their mitzvah of healing the world.”
As her work as an active pulpit rabbi comes it an end, Rooks said she will now take time to consider what comes next on her journey.
“Now, with a six-month sabbatical ahead of me, to clear my mind and clean the ashes off the alter of my ever-burning spark of the divine, it’s time to listen once again for that still small voice,” she said.
“Its quite greedy of me, I recognize, to hope to hear God’s call so clearly once again,” she added. “Most people never experience that kind of intimate encounter once in their lives, and here I want it twice. But whether I will be that incredibly blessed, I am already eternally grateful.”