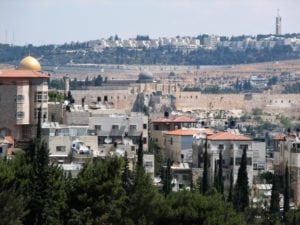 A view of the Old City of Jerusalem from Abu Tor. President Trump is expected to announce U.S. recognition of Jerusalem as the capital of Israel today. (photo provided)

(Editor’s note: This is a developing story. Watch Community for local and national updates.)

WASHINGTON — President Donald Trump will recognize Jerusalem as Israel’s capital, but will not open an embassy there for years and will reassure the Palestinians that the recognition does not impinge on their claims to the city.
It’s likely to be years before an embassy opens in Jerusalem, top advisers to Trump said. The embassy currently is in Tel Aviv.
Three senior administration officials spoke Tuesday evening with reporters and outlined the remarks that Trump is expected to deliver Wednesday at the White House.
The officials said Trump would recognize Jerusalem as Israel’s capital because it is where the seat of Israel’s government is, for decades there has been broad bipartisan support for such a recognition, recognizing Jerusalem was a campaign pledge and not recognizing the city as Israel’s capital has done nothing to advance the peace process.
Trump, who spoke Tuesday with the leaders of Israel, the Palestinian Authority, Egypt, Jordan and Saudi Arabia, will make clear that U.S. recognition does not presume a final status outcome for the city, saying that is still up to the parties. Additionally, he will say that the status quo at the holy site known to Jews as the Temple Mount and to Muslims as Haram al-Sharif should not change.
Muslims currently exert some controls over access to the Temple Mount, where there is a shrine and a mosque, and which is considered the third holiest site in Islam. The adjacent Western Wall is wholly under Israeli and Jewish control.
The Temple Mount is the holiest site in Judaism, but Israeli authorities, in an arrangement with Jordan — which maintains a say on what happens at the site — discourage open Jewish prayer at the site as a means of preventing clashes.
In an apparent salve to the Palestinians and Arab leaders, who have warned Trump that recognizing Jerusalem as Israel’s capital could be explosive and could scuttle the peace process that his son-in-law, Jared Kushner, is trying to revive, Trump will say he backs a two-state solution, if that’s what the parties want.
Israel’s ambassador to Washington, Ron Dermer, signaled Israel’s happiness with the speech. At a Hanukkah reception Tuesday night, Dermer predicted Trump “would take an honored place alongside President Truman.” Harry Truman is lionized in Israel for recognizing the state within minutes of its establishment in 1948.
Trump soon after assuming the presidency in January broke with over a decade of U.S. policy and pulled back from endorsing the two-state solution.
The advisers said no site had been identified for the embassy, and it would take at least three to four years to build one. They noted that building the new U.S. Embassy in London, due to open next year, took eight years.
Trump, they said, would sign a waiver of the 1995 law mandating the move. The waiver must be renewed every six months, and Trump had missed the Dec. 1 deadline, fueling speculation that he would not sign it at all.
The senior advisers dismissed claims that opening the embassy would take simply affixing a new plaque on the U.S. Consulate in western Jerusalem, saying that a whole range of security protocols needed to be in place before opening an embassy.