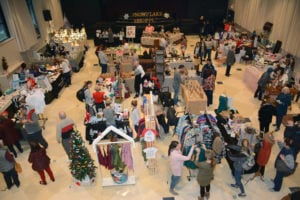 What does the Jewish Community Center have in common with Snowflakes? Everything, at the third annual Snowflake Shoppe at The J. With paper snowflakes being used as indoor decoration, five different rooms, were transformed into a shoppers dream. Mark and Jane Biek were among the hundreds who shopped until they dropped. “I cannot believe the amount of work people have put in,” said Jane. Her husband Mark agrees saying, “I was blown away by the scale of the thing too. We’re here anyway, working out. Shopping here helps our community by helping smaller businesses.”
The event featured vendors showcasing everything from leather goods and home décor, to homemade jewelry, candles and children’s toys, with proceeds benefitting the Early Learning Center. Director Norma Cahen says the Snowflake Shoppe is a win-win for both The J, and the public. “This brings future members into the agency. It lets everyone see what we have to offer,” says Cahen. “We’ve gotten bigger every single year because people are recognizing that this is a fun place to be.”
Around 80 vendors took part in this year’s event including Kelsey Boone who works with Scarlett’s Bakery. “We have been open for two years. We feel it is still important to get our name out,” said Boone. “Because of our St. Matthews location, I think this is a great stop especially as the holidays approach and it is a great fit. There have been plenty of people who haven’t heard of us and hopefully, because of this event, will visit our store soon.”
Convenience seemed to be a major benefit. Many people do not like shopping in malls around the holidays. Laura Baer of Initial Outfitter’s, said she participated in the Shoppe because, “this event is more personal than shopping in malls. People like to buy local and shop local, and support our local community. I think this is the way to go. By the crowd we see today, it shows.”
Adds Sarah Brown, who was selling her handmade Christmas wreaths. “As someone who works from home, I don’t have a store front. This is a great opportunity to see people. Even if I don’t sell a ton, I know it’s still good marketing.”
Ari and Justin Wilson were among the many looking for deals, and finding them. “The person I was buying from, worked out something for me,” said Ari. “If you ask, most of them would be willing to help out.”
This year, the event brought in nearly $10,000 for the Early Learning Center. “It’s exciting to see all the parents and children,” says Cahen. “They’re supporting us, and we’re helping them. It’s a wonderful place to be.”
If you missed this year’s event, don’t worry, because by all accounts, the Snowflake Shoppe will be back next year, bigger, better, and probably Snowflakier as well.