It went down to the final seconds, but the Louisville BBYO AZA basketball team is again the champions of the Drew Corson AZA Basketball Tournament held on Saturday, November 11. 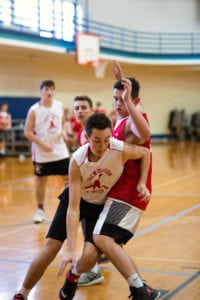 The atmosphere inside the lower gym was electric, with members of the facility joining in as members of the crowd to cheer on their Louisville BBYO team during the finals against Indianapolis. Louisville was the favorite heading into the match, and they put on a show for the gathered crowd. With only seconds left on the clock and the game tied 26-26, Indianapolis committed a shooting foul, which put Louisville at the line for two free throws. Louisville took the lead with seconds to go by making one of the two shots- giving Indianapolis the chance for one last play to win the game. Once the inbound pass was made, the Louisville full-court press ascended, preventing Indianapolis from getting the ball across the line. When the clock ran out and the final buzzer rang out, the gym erupted in celebration, as the Louisville BBYO chapter was once again champions.
The tournament featured teams from across Kentucky, Indiana and Ohio who gathered for a fun-filled day of activities. BBYO Louisville City Director, Kari Semel, explained that many core Jewish values can be translated through sports, but, while winning is a big part of the tournament, these teams know it’s about so much more than that.
“It’s great seeing the teamwork out there and the boys working together,” Semel said. “If someone gets injured, the players stop what they are doing because above all else, they are not enemies. They are friends who care about each other.”
Each team consisted of players ranging from eighth to 12th grade. Many of the teams had been practicing every weekend since the beginning of the year. While this event is for boys only, the girls got involved by cheering on their respective teams and participating in other wellness programs including yoga and pilates. The excitement was followed by an alumni basketball game against the Louisville AZA team and a pizza party. 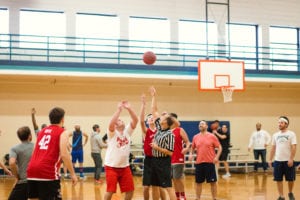