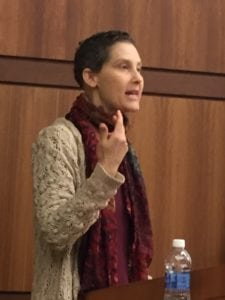 Rabbi Susan Goldberg discusses the making of Transparent at the University of Louisville.(photo by Lee Chottiner)

In the Torah, the midbar (wilderness) was a place where the Israelites wandered for 40 years before reaching the Promised Land, but Rabbi Susan Goldberg has a different take.
To Goldberg, a spiritual leader at the Wilshire Boulevard Temple in Los Angeles and a consultant on the hit Amazon TV series Transparent, the wilderness is a spiritual place, one where Jews never leave.
After Egypt, she noted, the rest of the Torah is spent in the wilderness. Even as Moses gives his final directions to the people before they cross the Jordan River, the Torah ends, and we start reading it over again.
“We never get there,” Goldberg said. “We are always in the wilderness. That, to me, is a tremendous theme.”
It’s a theme that the writers of Transparent picked up on in the first season of the award-winning series starring Jeffrey Tambor as Mort (Maura) Pfefferman, a retired Jewish college professor who comes out to her family as a transgender woman.
Goldberg spoke about the groundbreaking show Sunday at the University of Louisville, the second of two to address the program, its distinct Jewish favor and its impact on the transgender experience. Zackary Drucker, a transgender artist and one of the show’s producers, spoke here in October.
“I think it’s the most Jewish show that’s ever been on television,” Goldberg said of Transparent.
That’s because Jewish themes in the show are front and center – like Yom Kippur, Israel, candle lighting on Shabbat.
And the wilderness.
Quoting a midrash, Goldberg said the Torah was given with three particular things: fire, water and wilderness.
“Because they’re all free,” she said. “Wisdom comes when you are in a free state…. We have to be ownerless to acquire wisdom.”
In the show, she said, Maura finds herself in the wilderness acquiring wisdom. To do so, the rest of her family must also take her journey.
Two of Maura’s grown children, son Josh and daughter Ali, struggle with her new gender identity, but Sarah, the oldest child who has left her husband for a woman she fell in love with in college, is more accepting.
“All are thrown open to the wilderness, all the characters,” Goldberg said. “It’s Maura’s journey, but they have to struggle, too.”
In introducing Goldberg, Ranen Omer-Sherman, professor of Jewish studies and comparative humanities at UofL said the world’s monotheistic religions are surprisingly tuned in to the idea that a soul doesn’t always mesh with its assigned gender.
He quoted an Islamic scholar who said her religion’s literature “grapples with what happens when a soul doesn’t match a person’s body.”
Omer-Sherman also said kabbalistic and Jewish legal masters, including Rabbis Joseph Karo and Vital, “talked of transmigration of souls and of souls having genders that do not match with the gender of their physical bodies.”
A former dancer and choreographer, Goldberg was ordained by the Academy for Jewish Religion in Los Angeles and has been at the Wilshire Boulevard Temple since 2013.
One of her congregants is writer and comedian Jill Solway, the creator of Transparent, whose own parent came out as transgender. Solway’s personal experiences inspired the show.
“She made art out of her life,” Goldberg said.
The series has won a Golden Globe Award for Best Television Series, and Tambor, who is Jewish, has collected a Golden Globe and two Primetime Emmys for his portrayal of Maura.
As a consultant for the show, Goldberg typically reads scripts, and makes comments about their authenticity. She is often on the set during the filming of episodes, but she hinted that her job may change as the series enters its fifth season.
She also modeled the role of Raquel Fein, a female rabbi with a loudly ticking biological clock, played by actress Kathryn Hahn. Hahn shadowed Goldberg to learn how to play the part.
According to Goldberg, many single female rabbis relate to “Rabbi Raquel” and the pressure she feels to have her own family.
Not every aspect of the show has been so positive. Tambor, 73, just announced he is leaving Transparent following accusations of sexual harassment by a former assistant, Van Barnes, who is transgender, and a cast member, Trace Lysette. Tambor has denied the allegations and Goldberg, who was in Louisville after Barnes came forward, had no comment on the news.
More important to the rabbi is how Transparent had changed her.
She said she is learning to be an advocate for transgender people among Jews, encouraging more appreciation and support for them.
She despaired, though, that many Jews reflexively wonder why a TV show about a Jewish family must have a transgender parent.
“I get where that’s coming from,” Goldberg said. “It’s an old place – let’s not show the goyim everything.
“But,” she added, “it’s a place of shame.”