Sara Ozorai (right), a Jewish activist from Budapest, Hungary, listens to guests following her November 5 presentation on Hungarian Jewish life at The J. Ozorai and her colleague, Hedi Pusztai, were on a five-city tour, sponsored by Partnership2Gether, to talk about the revitalization of Jewish life in Eastern Europe. (photos by Lee Chottiner)

Sara Ozorai and Hedi Pusztai stood before the capacity crowd in The J’s Patio Gallery, going on about the happening nightlife in the Budapest Jewish Quarter and the programs, camps and schools that engage young Hungarian Jews with their faith.
It was hard to believe at times that these two young – and Jewishly committed – women were talking about the same Hungary that lost more than 400,000 Jews in the Holocaust and saw the remnant of its community driven underground by four decades of communist rule.
But that was precisely their point. Pusztai, 31, a project coordinator for Partnership2Gether in Budapest, and Ozorai, 28, one of the community’s active lay leaders, wanted to project a new face for Hungarian Jewry – young, vigorous and looking to the future.
“The Holocaust happened; of course, we have to remember that,” Ozorai said. “but for the young generation, we have to make sure this is not the first thing they have in mind.”
Ozorai and Pusztai’s program Sunday, November 5, “Jew-dapest: Then andNow,” was part of their five-city speaking tour to Partnership2Gether communities in Kentucky, Indiana and Ohio.
Partnership2Gether is a program that connects Jewish communities in the Diaspora with areas in Israel, primarily in the Negev and Galilee, building community and leadership. Louisville is partnered with Akko.
Megan Maurer, co-chair of Partnership2Gether’s Budapest Task Force, who introduced the women, said the purpose of the visit here was to raise awareness about the work Partnership2Gether is doing, which includes cultivating Jewish life in Budapest. 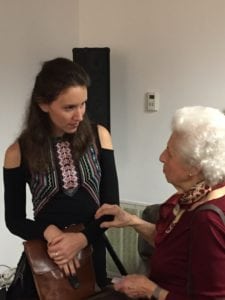 “Budapest today is exciting and engaging,” Maurer said, “bringing Judaism to the old generation and for the future.”
Budapest is indeed a success story. Home to approximately 100,000 Jews, it is the largest Jewish community in Europe, with 22 active synagogues, schools, a JCC, kosher bistros and butchers. It also sends about 250 Jews to Israel each year on Birthright/Taglit trips.
Many of its young Jews are just now discovering their identity.
Pusztai has worked for the Budapest Jewish community for nine years. Before then, she had virtually no contact with it.
“I always knew we were Jewish,” she said, “but I couldn’t talk about it when we were not at home.”
That changed when, at age 23, she learned about Birthright. Nervous that she wasn’t Jewish enough to participate, she nevertheless took her first trip to Israel.
“I came back a different person,” she said. “I went there as a young Hungarian girl looking for her identity. I came back as a Jew.”
She eventually made aliyah and spent a couple of years in the country. Back in Budapest, she is now an education coordinator, working to transmit her experience to others.
She described what is happening in Budapest today as a “Jewish Renaissance,” but she’s mindful of the ashes from which this renaissance is rising.
In a slide show of Jewish Budapest, she directed the crowd’s attention to a slide of the city’s Holocaust Memorial, “Shoes on the Danube Bank,” which commemorates those killed by an execution squad of the Arrow Cross, Hungary’s fascist party. The victims were ordered to take off their shoes on the edge of the Danube River, then they were shot at the water’s edge. Their bodies fell into the river and were carried away. The memorial depicts their shoes left behind on the bank.
“[They] were killed by Hungarians,” Pusztai said, “not even Nazis.”
After the war, the surviving Jews in Budapest – communities elsewhere in the country were virtually wiped out – buried their Jewish pasts. Many told their kids they were Jews only after communism fell in 1989.
“People from our generation didn’t know anything about their Jewish roots, Pusztai said. “That’s what we’re trying to change now.”
For Ozorai, who was born the same year communism ended, Birthright also became her gateway to Judaism.
She described how Jewish festivals have sprung up in her country. Jewish schools have opened. A Jewish camp attracts hundreds of kids, and an organization, the Chaver Foundation, sends Jewish speakers into schools to dispel false notions about Jews.
She has caught the Jewish fever, too. In fact, she’s returning to Israel next summer to spend five months on Kibbutz Harduf near Haifa and to work as a madricha (counselor or guide).
“It’s our generation that has the chance to start something new,” Ozorai said.
One thing neither woman discussed was the changing political climate in Hungary, which observers say has become increasingly xenophobic and anti-Semitic. When asked, Pusztai used the word “scary” to describe some of the things she has seen or heard, but both women made it clear that they didn’t feel threatened living there.
Sitting in the audience were some Jews who had their own Hungarian connections.
Frank Schwartz fled Hungary in 1956, following the 10-day revolution. He listened to the women, taking notes as they spoke. Afterwards, he said he found what they said “very interesting,” but he wondered if the Jewish community has made any effort to reach out to anti-Semitic elements in the country, perhaps debunking their notions about Jews.