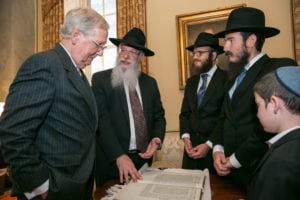 Rabbi Avrohom Litvin shows a volume of Talmud that once belonged to the fourth Chabad-Lubavitch rebbe to Senate Majority Leader Mitch McConnell. (photo provided by Chabad)

When a man falls into an ocean, The Mishna teaches, it is forbidden to lose hope of seeing him alive again – even if there’s no sign of land.
Rabbi Avrohom Litvin taught that midrash to Sen. Mitch McConnell on November 8 in Washington, reading the passage from a 155-year-old volume of Talmud Yevamot that had once belonged to the fourth Chabad-Lubavitch Rebbe, Shmuel Schneerson.
“Even if there’s no shore, you don’t give up that he’s alive,” Litvin said, “and we didn’t give up on this book.”
Litvin, co-director of Chabad of Kentucky, joined a group of Chabad rabbis in Washington to mark the return of the historic text, long held by the Russian government along with the rest of the late rebbe’s 12,000-volume library, called the Schneerson Collection.
Chabad-Lubavitch Chasidism started in Russia.
The book mysteriously found its way to an Israeli auction house where it was about to be sold two weeks ago. But a series of interventions, including a U.S. court order, prevented the sale and instead succeeded in sending the text to the states.
How the book got to Israel is still under investigation, but it is valuable, containing hand-written corrections by the rebbe himself and his official stamp. The auction house planned to start the bidding at $10,000.
David Friedman, the U.S. ambassador to Israel, formally received the book in Israel. It was presented to Chabad-Lubavitch Headquarters in Brooklyn, New York, on Sunday, November 19. Litvin was present for the ceremony.
McConnell, along with Senators Chuck Schumer (D-New York), Orrin Hatch (R-Utah) all received visits from the
rabbis in Washington. They also were the lead signatories on a February 27 letter to Russian President Vladimir Putin requesting the return of the Schneerson Collection to Chabad.
All 100 members of the Senate signed the letter.
“The discovery of this sacred text in Israel is a simcha for Chabad and the entire Jewish community and I am grateful to have been a part of this joyous occasion,” Schumer said in a prepared statement. “However, we will not rest until the entire Schneerson collection is returned to Chabad and I will continue to fight for its return from Russia.”
Chabad chose Litvin to be among the rabbis in Washington to receive the book because of his close connection to McConnell.
The Nazis seized the Schneerson Collection during World War II, but Soviet authorities took it back after the war. Today, it is held in the Russian State Library and the Russian State Military Archive, both in Moscow.
The book is the ninth volume from the collection to be returned to Chabad since 1992. The other volumes were returned during the Clinton administration and are also at Chabad-Lubavitch headquarters.
As he held the book in Washington, Litvin said he felt goosebumps, and for good reason
When he was born – on the fourth rebbe’s yahrzeit – his father decided to name him for the late sage.
However, he wrote of his plans to the last Chabad-Lubavitch rebbe, Menachem Schneerson, the rebbe said his ancestor’s memory had been sufficiently sanctified, and suggested naming the boy for his great-grandfather, as his father originally intended to do.
Litvin admitted he always found that story to be “a little twilight zone” – until he actually opened the Talmud volume.
“On the front page there was that stamp of the Rebbe Maharash (a nickname for Shmuel Schneerson),” Litivin said. “It was other worldy; I was goose-bumped, as if the rebbe somehow knew.”