Flush with cash from two major grants within the past 30 days, New Roots, the Louisville-based nonprofit dedicated to food justice for all neighborhoods, is eyeing an expansion of its Fresh Stop Markets and training leaders to run and promote them.
New Roots has received a $100,000 grant from the Humana Foundation and a $45,000 grant from the Jewish Heritage Fund for Excellence (JHFE).
“We really believe in what New Roots is trying to accomplish,” JHFE Executive Director Jeff Polson said. “It goes so well with promoting Jewish values and, quite frankly, we were impressed with the results they were able to obtain in one year.”
The Humana Foundation could not be reached for comment. 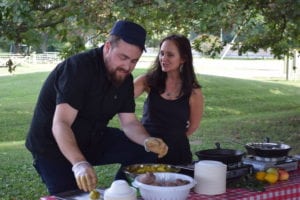 Karyn Moskowitz with chef Sasha Chack at a 2016 Fresh Stop Market at The J. (Community photo)

Karyn Moskowitz, New Roots founder and executive director, said the grants have “inspired” her, enabling her organization to exemplify Jewish values.
“The Humana Fund and JHFE have invested in making fresh food a basic human right,” she said.
But the clock is ticking for New Roots. Moskowitz believes the days of big grants for small NPOs like hers are coming to an end, compelling New Roots to develop new sources of funding.
“They (the grants) position us to spend the year figuring out how to diversify our donor base,” she said. “We can’t continue to be dependent on these large grants; we have to look to the community, individual donors, to invest in the future, but this gives us some good time.”
Fresh Stop Markets are bimonthly “pop up” farm-fresh food markets set up at local churches and community centers, including The J, to combat food insecurity. Families pool their money and SNAP benefits to purchase produce in bulk from local farmers on a sliding scale. Each family receives a share of the produce, enough to feed two to three people for two weeks.
The markets also are communal events where shareholders can meet with friends and neighbors to learn from chefs who are on hand to demonstrate how to cook the produce into tasty dishes.
The grants will enable New Roots to engage in what Moskowitz called “capacity building” for the organization, including expanding the market network, improving technology to track shareholders and food orders, and especially enhancing its human resources.
“That means attracting new leaders to the movement,” she said. “That, in turn, will attract more shareholders at The J and replicate that model at another space nearby.”
Among those leaders, she hopes, will be young people who will discover a passion for Jewish values by connecting to local, sustainable agriculture.”
“We want to pull the teens in for their mitzvah projects,” she said. “A lot of teens will do their project and that’s it. We want to say, ‘commit to this movement.’”
Moskowitz named Berrytown, a historic community near Anchorage founded by freed slaves, as a possible site for the next Fresh Stop Market. Descendants of the original Berrytown settlers still live there, as do more recent refugees struggling to find access to fresh produce.
Fresh Food access is a problem across the region, Moskowitz said, including places where Jews live.
“If you live in Shalom Tower and you don’t have a car, you don’t have access, and even if you live near a market, but can’t afford fresh food, you are fresh food insecure.”
New Roots supported 14 Fresh Stop Market locations this past growing season – eight in Louisville, two in southern Indiana, two in Lexington and one each in Hazard and Brandenburg.
Moskowitz is planning trips to Atlanta and Huntington, West Virginia, to make presentations about the Fresh Stop model with Jewish community leaders. She also said she is taking calls from other communities interested in the concept.
“The Jewish community has been so important to this movement over the years,” she added.
More grants may be coming. New Roots, the University of Kentucky and the University of Tennessee are jointly applying for a three-year, $300,000 grant from the U.S. Department of Agriculture. New Roots’ share of that grant, if approved, would be $30,000 per year, Moskowitz said.
The grant would be used to “codify” the New Roots process for setting up markets “so leaders in new communities can replicate the model instead of reinventing the wheel,” Moskowitz said, “but it’s flexible enough so every community can make it their own.”