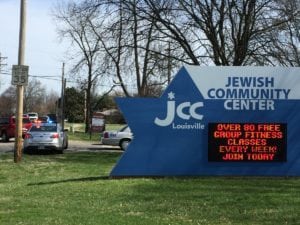 The Louisville J was one of many Jewish facilities in North America to receive a bomb threat earlier this year. The threats were factored into a new Anti-Defamation League report, which shows the rate of anti-Semitic incidents has spiked sharply this year. (photo by Lee Chottiner)

NEW YORK — Anti-Semitic incidents in the first nine months of 2017 have risen 67 percent over the same period last year, according to the Anti-Defamation League, which factored in a string of bomb threats largely attributed to a Jewish man in Israel.
On the current pace, the number of incidents will nearly double the figure from 2015.
There was also a 92 percent increase in anti-Semitic incidents in New York City — 171 this year compared to 89 in the corresponding period last year.
Anti-Semitic assaults, however, have fallen 60 percent: There were 12 assaults in the first nine months of 2017, as opposed to 29 over the same period last year.
Thursday’s report by the ADL, which fights anti-Semitism and bigotry, said that in addition to the waves of bomb threats against Jewish institutions at the beginning of the year, the main driver of anti-Semitic incidents was the white supremacist rally in Charlottesville, Virginia, in August.
Most of the 162 bomb threats are suspected of coming from an American-Israeli Jewish man living in Ashdod, Israel. Even discounting those threats, there was still a 46 percent increase in incidents. The seven weeks following the Charlottesville rally saw 221 incidents of anti-Semitism.
“We are astonished and horrified by the rise in anti-Semitic harassment, incidents and violence targeting our communities,” said Jonathan Greenblatt, ADL’s CEO and national director. “While the tragedy in Charlottesville highlighted this trend, it was not an aberration. Every single day, white supremacists target members of the Jewish community — holding rallies in public, recruiting on college campuses, attacking journalists on social media, and even targeting young children.”
Following the arrest of the Jewish bombing hoax suspect in March, Greenblatt explained why the ADL would continue to include the threats — which forced the evacuations of Jewish community centers, synagogues, Jewish preschools and the ADL itself — in its tally of anti-Semitism.
“While the details of this crime remain unclear, the impact of this individual’s actions is crystal clear: These were acts of anti-Semitism,” Greenblatt said in a statement at the time. “These threats targeted Jewish institutions, were calculated to sow fear and anxiety and put the entire Jewish community on high alert.”
There were 1,299 incidents of anti-Semitism between Jan. 1 and Sept. 30, according to the report. In all of 2016, there were 1,266 — a 34 percent increase over 2015. If the 2017 pace continues, this year will see 1,732 anti-Semitic incidents, close to double the 942 incidents of two years ago. The last year with that level of anti-Semitism was 2005, according to ADL figures.
Most of the incidents, including the bomb threats, fell into the category of harassment. There were more than 500 incidents of anti-Semitic vandalism along with the 12 incidents of physical assault. The 269 incidents in elementary, middle and high schools more than doubled the 2016 figure. Incidents on college campuses also increased nearly 60 percent since last year.
States with high Jewish populations saw the most incidents, including New York, California, Massachusetts and Florida. New York state has seen 267 incidents up to Sept. 30, more than the 199 reported all of last year. Most of the incidents were acts of vandalism.
ADL canceled a Thursday news conference about the report, citing Tuesday’s terror attack in Lower Manhattan in which eight people were killed.