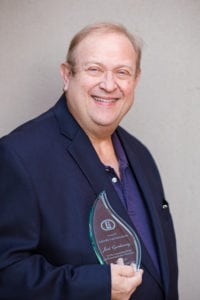 The Louisville Vaad HaKashruth honored its president, Jack Czerkiewicz, during an October 15 kosher dinner at the Pointe.
Czerkiewicz received the Chase Award for his outstanding efforts in promoting kosher observance in Louisville, and for his devotion to the Vaad. The award is named for the late Aaron Chase who played a key role in developing the Vaad.
Czerkiewicz, in his acceptance speech, called for more opportunities to keep kosher in Louisville. Specifically, he cited a need for a kosher bakery here.
During his d’var Torah, Rabbi Simcha Snaid of Anshei Sfard reminded the guests of the need for a mikvah in Louisville. He said it is the obligation of the community to pay for it.
Since the sale of Anshei Sfard is pending, the Vaad is working on plans to move the mikvah, currently on synagogue property, to a new location.