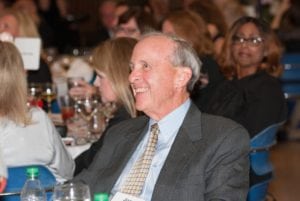 Jon Fleischaker listens as his friend, Tom Hampton, talks about his scholastic athletic career during his Oct. 19 tribute dinner. (photo by Debby Rose)

Jon Fleischaker’s professors at the University of Pennsylvania Law School were astounded when the promising young law student told them he would return to his native Kentucky to practice.
“They said I would never have an interesting career,” Fleischaker recalled as the 300-some people gathered at The Temple last week to honor his work erupted in laughter.
Their reaction was understandable. In his 47-year career, Fleischaker has become known as one of the leading defenders of First Amendment rights in the state.
He drafted Kentucky’s Open Records Law.
He forced the state Cabinet for Health and Family Services to open records that show how children died while under the department’s supervision.
He helped rural and urban newspapers resist suppression of news by public officials.
Fleischaker’s achievements were catalogued at an October 19 dinner, sponsored by National Council of Jewish Women, Louisville Section, where he accepted the 2017 David Reichart Award. A cross section of official Louisville – lawyers, journalists, judges, politicians and Jewish leaders – turned out to fete him.
U.S. Rep John Yarmuth, honorary chair of the event, noted how appropriate it was that Fleischaker was being honored.
“The Open Records Law is dear to this NCJW section,” Yarmuth said. He lamented that the First Amendment “is under assault from one direction or another.”
The evening had two purposes: to celebrate Fleischaker as a “champion of transparency and the First Amendment,” as the program said, and to raise money to reestablish the Jefferson County Family Drug Court – a cause embraced by the NCJW.
The dinner raised $294,000, Yarmouth said, more than half the $561,000 needed to operate the court for three years.
The court, which was disbanded in 2008, seeks to help drug-addicted parents piece together their lives and become reunited with their children whom authorities have removed from their custody.
“We can’t incarcerate our way out of this problem,” said state Senator Morgan McGarvey, D-Jefferson, who spoke at the event. He said the money raised, while necessary, was only a temporary measure until the state once again supports the court.
Two women, Yolanda Coleman and Ronda Maddox, who went through the Family Drug Court before it was defunded, shared their heart-breaking stories of addiction, loss and their struggle to get clean and get their kids back.
“Recovering is a lifelong process,” Maddox said. “I have to make a commitment every day.”
But the evening belonged to Fleischaker who was lauded (and sometimes roasted) by friends, family and colleagues.
Franklin Circuit Judge Philip Shepherd called him “a prominent lawyer of our time in the field of the First Amendment.”
Longtime friend and classmate Tom Hampton took a friendly swipe at Fleischaker with a slide show of his high school and college sporting highlights. (He used a golf club as a pointer.)
And Provost David Lee of Western Kentucky University thanked Fleischaker and his wife, attorney Kim Greene, for their establishment of the Fleischaker-Greene Fund for Excellence in First Amendment Issues, and
the Fleischaker-Greene Award for Courageous International Reporting.
The recipient of this year’s Fleischaker-Greene Award, Lotfullah Najafizada, established the first 24-hour news channel in Afghanistan.
But Jeff Fleischaker, son of the honoree, drew a standing ovation for his emotional tribute to his father, touting his devotion, not just to his job, but his family.
Tearfully, Jeff described how often his father travels to be part of their grandchildren’s lives, contrasting that to his own grandfather who died before he could know him.
“Whether you know it or not, your part of their identity,” Jeff told his father from the dais.
“I’m here to celebrate my dad,” he added. “Father, I’m proud of you.”