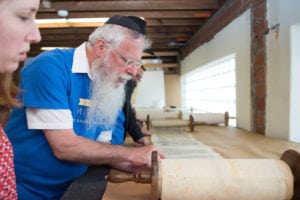 For two days, Rabbi Avrohom Litvin and his son, Shlomo – their mouths covered with masks and hands draped in gloves – sorted through the storm and human damage inflicted by Hurricane Harvey.
They schlepped dry wall and waterlogged possessions from flooded homes and at least one synagogue.
They staffed a warehouse where victims came for food and supplies.
They comforted a host of people who lost everything in the storm.
The Litivins were two of 50 rabbis who volunteered their time to assist with the relief effort in Houston. Chabad and One Mitzvah jointly organized the effort.
Litvin, director of Chabad of Kentucky, said the call for volunteers came as rabbis of Houston’s 12 Chabad centers realized the damage, and fallout from it, were overwhelming them.
Litivin said he got a call at 11 a.m. Tuesday, September 5, asking if he could be in Houston by 7 p.m. that same day. He and his son made it by 11 p.m.
The Litvins spent much of the next 48 hours picking through damaged homes, pulling out debris that may or may not be salvageable.
At an Orthodox synagogue in the Meyerland neighborhood of Houston, they helped fill a dumpster with prayer books and other writings so damaged that they must be ritually buried.
At an art studio where six Torahs from a Jewish nursing home were brought for safekeeping, they checked three scrolls with moisture damage, gauging whether they were still kosher and could be used in worship services.
But the most important thing they did, according to Litvin, was give moral support to Houstonians as they picked up the pieces.
“All of their material lives, everything they had, were in piles in front of their homes waiting to be thrown out,” Litvin said.
He compared the work to “visiting a shivah house.”
Everywhere they went, they heard stories of moral fortitude, like that of Arik and Ruth Sharon, an elderly couple from Israel, and their daughter, who invited a family of nine into their house and out of the driving rain.
It turned out the family was from Saudi Arabia.
Litvin met another man who flew to Houston from Hawaii with nothing more than a bag of tools and a backpack of clothes to pitch in where he could.
And he saw two teams of Mormons helping Houstonians rip out their dry wall and floors before mold set in and ruin their possessions.
With Charlottesville, and the hate it generated, still a fresh memory, Litvin said these stories showed him that the country would still be OK.
“It wasn’t about Jews, it wasn’t about color or creed,” Litvin said. “It was about people helping people.”
The rabbis stayed at Aishel House, a kosher home away from home for patents and their families seeking treatment at Texas Medical Center. They received safety training from firefighters before they broke into 15 groups and fanned out across the city to help.
Litvin said the experience was a stark reminder of the “frailty of life, noting that everyone is just eight inches [of water] away” from disaster.
We all need each other,” he said. “We’re all in this together.”