(Editor’s note: Ruth Greenberg, a professor emeritus at the University of Louisville School of Medicine, a free-lance writer and a grandmother, begins a blog exclusive to Community on the changing face of grandparenting.)
For my mother, being a grandmother meant knitting sweaters and afghans, cooking her grandchildren’s favorite foods, acting as a 24/7 on-call babysitter and sending a monthly $5 check to the grandkids in college so they would call to say, “thank you.”
That was grandparenting in the late 20th century.
How times have changed.
For me, being a grandmother means knowing how to use the ESPN Fantasy Football app so I can text my grandsons about our family-wide Fantasy Football league; taking my grandsons to San Francisco and seeing a Warriors basketball game while we’re there because they’re crazy about the NBA; and cooking crispy chicken and homemade applesauce for Sunday dinner whenever we can make their schedules work.
Oh, yes, there’s also playing poker, carpooling and babysitting. (Some things never change.)
In the 30 years between the births of my children and my grandchildren, grandparenting has undergone a sea change. Grandparents today face challenges their predecessors probably couldn’t imagine.
Look at the numbers: First, advances in medicine and technology have contributed to longer life spans. According to a recent Met Life report on American Grandparents, the number of grandparents today is at an all-time high and growing at more than twice the overall population growth rate. There were approximately 65 million grandparents in 2010; by 2020, we should number 80 million, or one in three adults.
Americans are becoming grandparents at a younger age. Jewish grandparents, whose children tend to be better educated and marry later, may fall above the national average age for grandparents (48). I became a grandmother at age 55. The American Grandparent Association website reports that 43 percent of us became grandparents in our fifties, 37 percent in our forties. 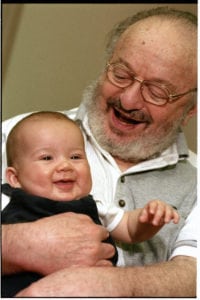 The role of a grandparent is evolving in the 21st century.

A 2015 Pew Research Center survey found that 52 percent of grandparents ages 50-64 reported having grandchildren.
If you think raising a child is expensive, consider these numbers: The American Grandparents Association website reports that grandparents spend $52 billion annually on their grandchildren, with $32 billion accounting for education-related costs.
In October 2016, TD Ameritrade surveyed approximately 1,000 millennial-age parents and 1,000 grandparents with millennial children. The grandparents reported that they spent an average of $2,383 a year to benefit their grandchildren, with most of the money going to clothing and toys. They also contributed $452 annually toward college savings.
(Grandparents also support their adult children – on average, $4,527 annually. Twenty-six percent of the millennial children said they would not be able to maintain their lifestyle without their parents’ generosity.)
Rabbi Joe Rooks Rapport, a senior rabbi at The Temple, said many Jewish grandparents provide financial support for activities that relate to Jewish education – for example, Sunday school, Hebrew school and summer camp. They help in hopes that these experiences will strengthen their grandchildren’s Jewish identify.
Most grandparents hope to have close, loving and lasting relationships with their grandchildren. But changes in the American family and the lifestyles and career paths of young parents complicate that desire.
Rabbi Robert Slosberg of Adath Jeshurun believes that the forces of divorce, intermarriage and distance create challenges for grandparents seeking to bond with their grandchildren and play active roles in their lives. As a new grandparent, he longs to be with his first grandson, who lives in New Jersey. He enjoys frequent Facetime interactions, and videos and pictures sent from his daughter, yet he is feels as though he’s missing out on “real time” with his grandson because of the distance between Louisville and New Jersey.
Mauri Malka, director of family services at Jewish Family & Career Services, has seen a shift in grandparenting over the last 27 years. Some of the changes come in the form of challenges she has seen as Louisville grandparents cope with family issues around divorce, intermarriage, substance abuse and family dysfunction. Perhaps the most difficult challenge, though, arises when a grandparent assumes full responsibility for parenting grandchildren.
Grandparents raising grandchildren, she explained, may experience a kind of grief and loss – grief from knowing that their children can’t take care of their own kids, loss from having to give up their traditional grandparenting role.
With the growing number of grandparents who must resume active parenting, JFCS has developed a service model to help these grandparents manage the stress that comes with the role. Staff assist by identifying resources for them, offering supportive counseling for individuals and families and providing support groups that promote mutual support, problem solving and education around a variety of topics that range from technology and bullying, to contemporary parenting and discipline.
Research on grandparenting is limited (lots of statistics, not as much guidance based upon research and best practices). The spruce website reports on one study that identified six factors that impact “intergenerational solidarity” (the grandparent-grandchild relationship):
• Physical proximity,
• Frequency of contact,
• Grandparents’ function within the family,
• Family expectations,
• Emotional bonding,
• Shared values.
How parents and grandparents manage these factors ultimately defines the kind of grandparent-grandchild relationship they will have. Consider how helpful it would be if parents and their grown children would work together to draft a grandparenting plan that considers each of these factors.
Make no mistake, grandparents play a crucial role in their grandchildren’s lives, emotionally and financially, and they want to make the most of this wonderful opportunity to support their children by being the best possible grandparents.
Guidance for grandparents is more readily available today than it was when I joined the ranks – a response to the growing number and importance of grandparents in family life and, of course, the technology revolution.
I think Louisville grandparents who are experiencing the joys and challenges of grandparenting in the 21st century would benefit from an ongoing conversation about the role. What issues do you face as a grandparent? Divorce? Financial problems? Intermarriage? The grandchildren’s Jewish identity?
Drop me a line at grandparentsblog@jewishlouisville.org. Tell me about your issues and the kind of information you would find helpful.
In my next column, we’ll focus on long-distance grandparenting and hear from local grandparents who have developed wonderful strategies for overcoming the challenges associated with living far from their grandchildren. After that, the topics will come from you.
Until then, enjoy being grandparents. For those of you who are not grandparents yet, the best is yet to come!

Grandparent Points
• JFCS is launching a new support group for grandparents. The first meeting is slated for Thursday, September 28, 5:30-7 p.m., at the JFCS. Contact Mauri Malka at mmalka@jfcslouisville.org or 502-452-6341 ext. 250.