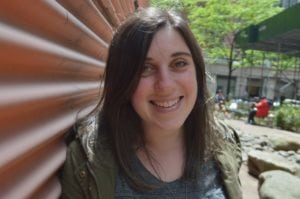 An Orthodox transgender woman shares feelings of alienation in the trans community because of her Jewish identity.
A woman who quit her office job to travel the world and become a “digital nomad” offers advice to others who may be contemplating the same.
A writer offers a list of six camp-themed novels that will feed the nostalgia of those missing summers filled with bug juice and cabin raids.
Readers are offered a free giveaway of a “Kiss My Tuchis” muscle tank to one lucky winner “who will clearly be the envy of everyone in their Zumba class.”
Welcome to Alma (heyalma.com), a newly launched website geared toward Jewish millennial women focusing on topics of cultural interest and forging a virtual community for those seeking a connection to others grappling with common “Jew-ish” issues.
The fledgling site, and its accompanying social media platforms (Twitter, Facebook, YouTube and Instagram), is part of 70 Faces Media, the parent company of JTA. Seed funding for the project came from UJA-Federation of New York.
Edited by Molly Tolsky, 31, the former editor of Kveller — a parenting website under the 70 Faces Media umbrella — Alma may be able to provide young Jewish women with just the right amount of Jewishness in exchange for minimal commitment.
Tolsky has experience in building online communities. In her seven years working at Kveller, she helped the site amass more 84,000 followers on Facebook and 11,000 on Twitter. Although Tolsky, who is single and has no children, enjoyed learning about parenting through Kveller, she also was interested in providing relevant content for her own demographic: young Jewish women navigating relationships while building their careers.
The name Alma – a Hebrew word meaning a woman of childbearing age who does not yet have children – fits the mission of the new project, according to Tolsky.
“Ninety-one percent of our followers are women between the ages of 18 to 25, so we are definitely hitting our demographic,” she said.
Not everyone who is an Alma fan, however, fits that profile.
“We got an email from a Muslim Pakistani woman who is dating a Jewish guy and found Alma and is loving it,” Tolsky said.
Mostly, though, Alma’s target audience is “unaffiliated Jews and Jews who are not participating in organized Jewish life,” she said. Many Alma readers are those who identify as Jewish and are interested in interacting with other Jews but at a cultural level.
Focus groups assembled prior to Alma’s launch in late June indicated that “there are so many younger Jewish people who care about being Jewish but who don’t want to go outside their daily lives and to be forced into being Jewish,” said Tolsky.
Alma, she said, gives them a way to connect in a manner that is comfortable and easy. Community, Tolsky noted, “happens more on social media, obviously, for this generation. We live on social media.”
Prior to having children, many young Jewish women typically are not particularly active in organized, institutional Jewish life.

“It’s important for people to have a place where who they are is being recognized and their level of being Jewish is OK,” Tolsky said. Alma, she added, acknowledges that “you don’t have to go to shul, or light candles, or keep kosher to be Jewish.”
Content on Alma has been varied, but one subject stands out as the most popular.
“Hair!” said Tolsky, who grew up attending a Conservative congregation in a northwest Chicago suburb. “It doesn’t surprise me. That’s something I noticed on Kveller, too.”
An article focusing on nine Jewish women and their “love-hate” relationships with their hair, illustrated with photographs, was a huge hit, she said. A photo essay titled “My Jewfro and I” has been the most viewed.
“Everyone has a personal relationship with hair,” Tolsky said. “And people like reading about other people’s hair.”
Alma posts new content daily, not all of which is directly related to being Jewish. Nonetheless, Alma is on its way to creating a virtual Jewish village.
“Jewish people do often feel an instant connection when they meet someone else who is Jewish,” Tolsky said. “We are hoping Alma will become an online community.”