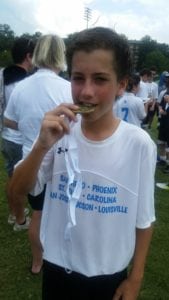 Eleven Louisville teens competed together to represent their city at the JCC Maccabi Games in Birmingham, Alabama July 30-August 4. The group brought back five medals including gold for Eli Resnik as part of a mixed city soccer team, and a silver for Ben Kaplin as part of a mixed city baseball team.
For the first time in many years, Team Louisville also sent a full basketball team to compete in the 14-U boys tournament and also had two athletes play 16-U Flag Football on a mixed city team. While neither team medaled in the tournaments, both had a great time at the games.
Team Louisville was a pillar of sportsmanship at the games, winning three middot medals, given to athletes, coaches, or volunteers who demonstrate the JCC Maccabi middot, or core values. Ben Kaplin received one from his baseball coach for helping some of the players on the team and Louisville 14-U basketball coaches Cooper Mannel and Ben Goldenberg also received middot medals for their efforts during the Maccabi Games.
The Games hosted nearly 900 Jewish athletes from across the United States, Israel and Ukraine, were an opportunity for teens to come together for a week of sports and meaningful Jewish experiences.
This year, the Maccabi Games fell on the Jewish observance of Tisha B’Av, which is a day to commemorate the destruction of the First and Second Temples. Athletes participated in JCC Cares, a day of community service, in honor of Tisha B’Av. The athletes spent their day at the Birmingham Civil Rights Institute and the Sixteenth Street Baptist Church, which was the target of a Civil Rights Era bombing that killed four young girls. Athletes listened to a moving recount of the event from a survivor and heard from JCCA’s Senior Vice President, David Ackerman, about the ties to Tisha B’av.
Win or lose, the Louisville delegation had an incredible experience in Birmingham. They formed strong relationships with their host families, their teammates, and the athletes from other delegations. The JCC Maccabi Games will take place from August 5-10 in Orange County, California next summer, and are open to all Jewish athletes ages 13-16. Interested in being part of Team Louisville next year? Contact Kari Semel, Teen Director, at ksemel@jewishlouisville.org for more information.