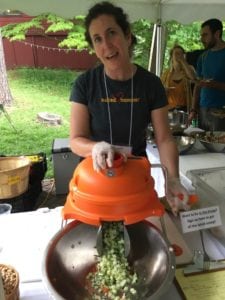 Fresh from the 12th Hazon Food Conference in Falls Village, Connecticut, Amy Green is ready to go public with some news.
The owner of Naked Hummus, a Louisville kosher-certified maker of chickpea products, is making plans to be a subscription-based business.
That means customers could one day have falefel delivered to their doorsteps.
Green also said that she made connections at the conference with people who could help her in the venture, including manufacturers of frozen food products, “which is where we’re going with our falafel.”
Recently, we got our certification,” she added. “So we’re

now kosher, according to the Vaad.
For now, Naked Hummus continues to sell its products on the web and at the farmers market at Douglass Loop.
Green described the Hazon Food Conference as an educational experience for purveyors of Jewish food in the 21st century.
“It’s really a conference about the future of Jewish food, where we’re heading with Jewish food,” she said. “It causes us [to think] not just about what we eat with regard to kosher, but everything surrounding that food.”
Green wasn’t the only Louisvillian there. Her husband, Ohad Holzberg, was at the conference, and The J’s JOFEE Fellow, Michael Fraade, was a presenter on the topic, “Israelite Agriculture and the Tanach.”
The conference addressed food’s impact on the environment, animal welfare and responsibility to employees through four tracks:
• Jewish food traditions;
• Cooking demonstrations and do-it-yourself experiences;
• Food justice and sustainability;
• Health and wellness.
“The Food Conference aims to inspire and motivate us to think more broadly about our food choices,” Hazon Senior 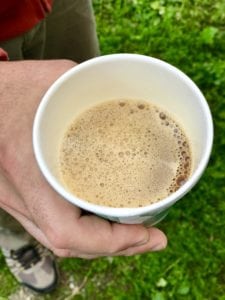 Green milked a goat to prepare what she said is the best cup of coffee she ever had in her life.

Program Manager Jessie Berlin wrote in her welcoming statement. “We hope that this conference…will help you consider new commitments around food for a sweet New Year.”
Hazon, which means vision, is a Jewish NPO that works to create a healthier and more sustainable Jewish community, and a healthier and more sustainable world for all.
Some presentations at the conference straddled the line between science and science fiction.
“We had a scientist talk about growing meat (animal protein) in a test tube,” Green said.
One program demystified the process of making meat kosher with a butcher actually demonstrating how to halachically slaughter an animal.
“Not everyone watched,” Green said. “We had the option.”
Green was especially proud of the cappuccino made with goat’s milk from an animal she milked herself. She appropriately called it a “goatccino.”
“It was the most delicious cup of coffee I ever had in my entire life,” she said.
Green and Holzberg also served roasted garlic hummus, pan-fried falafel and Israeli salad at a food festival there.
She’s convinced that Jewish food has a bright future.
“Absolutely, it does,” she said, noting that Jewish delis are opening across the country, though not without some controversy.
For instance, some of those delis have not-so-Jewish foods on their menus, like bacon.
“This is where it’s becoming a big question,” she said. “Is that Jewish food?”