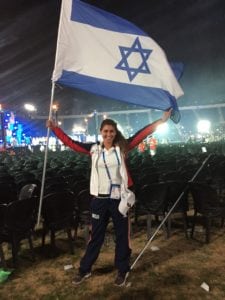 The just-concluded Maccabiah was a life-changing experience for Peyton Greenberg, but the champion swimmer and Louisville native said it was probably her last appearance at the Games. (photo provided by Peyton Greenberg)

Peyton Greenberg came away from the 20th Maccabiah Games this summer a winner.
Not only did the 20-year-old, 5-foot-11 swimmer, a junior at Northwestern University, swim three open events at the games, competing against athletes of various ages and experience levels, she won two silver medals in the 100- and 200-meter breaststroke events.
Her performances built upon her medal count from the 2013 Maccabiah when she netted a gold and two silvers.
But winning wasn’t why she went to Israel this summer. This time, the Louisville native was after a different prize.
“I was just interested in talking to as many people as possible on this trip,” she said.
An international relations major at Northwestern, Greenberg said she wanted to use this time in Israel to broaden herself and get ready for her career.
Mission accomplished.
“This changed my life,” Greenberg said of the latest Maccabiah. “It enhanced my connection to Judaism. I made friends from around the world and I really found a sense of myself.”
The Maccabiah Games, which took place this past July in Israel, are sometimes called the Jewish Olympics. First held in 1932, the games this year hosted some 10,000 athletes from 80 countries who competed in 47 events.
Greenberg talked to athletes from around the world and discovered that they labored for their sports under different circumstances.
For instance, she met a 50-meter swimmer from Hong Kong, who told her how the practice of Judaism is suppressed in China, and how he struggled for three years to connvince authorities to let him travel to the games.
“He only found out he could go come three days before the competition,” Greenberg said.
Wherever she went in Israel, Greenberg met people whose families came from countries in the Middle East, and Europe, who reached the Jewish homeland one step ahead of a mass slaughter or after surviving one.
One IDF soldier whose family made aliyah from Iraq, told Greenberg about an infamous massacre of Jews there. He was likely referring to the Farhud, the two-day pogrom of Baghdad in 1941 when at least 180 Iraqi Jews were killed and 1,000 were injured.
“Everyone has a story like that,” she said.
Greenberg’s Maccabiah experiences have informed her expression of Judaism. She attends Shabbat services at Hillel at least once a month; she expects to return to Israel; she’s even interested in pursuing dual citizenship.
“I identify more with Judaism than I did in the past,” she said. “I’m much more open to discussions about [Judaism]. I’m more open to explaining to my non-Jewish friends about why it’s important to me.”
A lifelong swimmer, Greenberg, the daughter of Rick and Debbie Greenberg, grew up competing for Lakeside Swim Club and duPont Manuel High School as well as Northwestern in Big Ten meets. She swam the 100-medley relay at the 2012 Kentucky State Championship, competed in the World Championship trials in 2013, and qualified for the 2016 Olympic Trials in Omaha.
She was one of three local athletes to be inducted into the JCC Athletic Hall of Fame in 2015.
She was one of two Louisville athletes to compete at Maccabiah. Andrea Glazer was on the show jumping team, which won the silver medal in that event.
Greenberg thanked her parents and coaches at Lakeside, duPont Manual and Northwestern for her success at the games.
While the Maccabiah Games left a left a lasting impression upon Greenberg, the just-concluded Jewish Olympics was probably her last.
“I’d have to train for two more years:” to prepare for the next one, she said, “and I probably should get a job.”