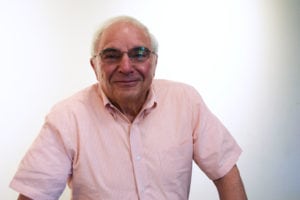 Even though it was about 15 years ago, Arnold Zegart still vividly remembers an impassioned speech by Ernie Marx at a Holocaust Remembrance Day Commemoration at Adath Jeshurun.
At first, Ernie spoke softly about living in Germany during the rise of the Nazis. His parents had saved up money for a new bicycle and Ernie had to learn his bar mitzvah Torah portion before he was allowed to ride it. He kept his soft tone (perhaps because it was simply too painful to remember) as he recalled Kristallnacht and how that evening fell shortly before his bar mitzvah.
But then, his voice picked up and he pounded the lectern as he exclaimed, “and then the Nazi’s came and STOLE MY BICYCLE that my father had worked so long and so hard to give to me!”
Arnold remembered distinctly how moved he was to hear Ernie tell his story. It was the first of many stories that Arnold would hear from Ernie as they developed a strong rapport and friendship up until Ernie passed away in 2007.
A few years later, when Arnold’s mother passed away in 2010, Arnold and his brother Kenny established the Rosetta Handmaker Fund. The fund helps to subsidize the Jewish Federation of Louisville’s annual Teachers’ Trip to the United States Holocaust Memorial Museum (USHMM) in Washington, D.C., and related programming for the teacher participants. Inspired by Ernie’s stories of survival and courage, Arnold and Kenny not only wanted to leave a legacy to honor Ernie’s and their mother’s memory, but they also wanted to educate the youth of tomorrow with stories that should never be forgotten.
“It’s important to me to leave a legacy in honor of my mother, Rosetta Zegart Handmaker, and Ernie Marx, who was a Holocaust survivor,” said Arnold. “Both of these special people had an enormous impact on my life and it is an honor and privilege to know that, through the fund we established, the stories of the Holocaust will continue to be shared and taught to future generations.”
By establishing the Rosetta Handmaker Fund, the Federation has been able to send nearly 90 teachers to the USHMM. The impact of this visit and the history that is shared with the hundreds of students privileged to learn from these teachers is immeasurable.
You, too, can establish a fund just like Arnold Zegart to sustain those Jewish programs that reflect your values and in return contribute to the future strength of Jewish Louisville.
To learn more about creating a fund at the JCL or leaving a legacy to any Jewish institution through Louisville’s participation in the LIFE & LEGACY program, please contact Jennifer Tuvlin at the JCL, jtuvlin@jewishlouisville.org or 502-238-2735.