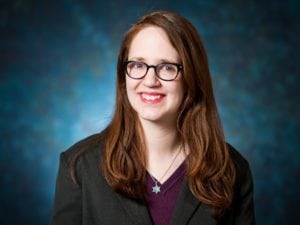 Diane Tracht may be the only Reconstructionist rabbi in Louisville, but that doesn’t mean she’s here to promote her own brand of Judaism.
“I wouldn’t be so bold as to say I can change Jewish Louisville, or that it even needs changing,” she said.
In fact, Tracht, who was ordained by the Reconstructionist Rabbinical College in Philadelphia on June 11, said she’s far more “excited” about experiencing Judaism as it’s practiced here. She said Jewish observance varies somewhat from place to place, whether it’s Louisville, Philadelphia or the Upper West Side of New York.
Tracht, who arrived in Louisville in August, is here to begin a year-long chaplaincy residency at Baptist Health Louisville. When she’s done there, she plans to seek certification from the Association of Clinical Pastoral Education.
She plans to make the chaplaincy the focus of her rabbinate, and she hopes to eventually train future chaplains.
Proud as she is to be an RRC alumna, she quipped that she is not here to “spread the gospel of Reconstructionist Judaism.”
“I’m a Jew. I’m a rabbi. I’m a Reconstructionist rabbi, but that is not what I keep in bold,” she said.
A Pittsburgh native, Tracht grew up in a family not connected to the Jewish community there, though it did observe Chanukah and Passover.
Still, Tracht said, she felt an intuitive connection to Judaism, and her high school career aptitude tests suggested she should pursue work in the clergy.
So when she enrolled at Haverford College near Philadelphia, she became active in the Jewish Student Union. That’s where she first met Reconstructionist rabbis, since RRC was nearby. She decided she would like to go to rabbinical school there.
Not all her Haverford experiences were so positive. She frequently met Jewish students who told her that because her mother wasn’t Jewish, neither was she.
“I was actually hearing that my whole life,” she said, “so in college I started really grappling with how traditional Judaism held that I wasn’t Jewish.”
After graduation, she studied at the Pardes Institute in Israel for a year before enrolling at RRC. During her first year at the seminary, she underwent a Conservative conversion.
“I had internalized to some degree that I wasn’t Jewish, so having a conversion was a route to heal from that spiritual wound,” Tracht said. “And I’m a somewhat a traditional Jew myself. Having that ritual being an option for a Jew like me a was a great opportunity.”
Chaplaincy work has appealed to her for some time. She recalled reading an article in her senior year of high school about a Jewish chaplain during the Iraq war who learned Muslim rites for the dying – a skill that came in handy when he comforted a dying Muslim.
That kind of compassion impressed her.
“If religion can cross over and provide healing in those moments,” she said, “ then let me do that.”
Though Tracht is the only Reconstructonist rabbi in Louisville (for now anyway), she is not the only the Reconstructionist-trained clergy. Cantor Sharon Hordes of Keneseth Israel received her cantorial education through a joint program established by RRC and Gratz College.
“It will be nice to have someone else in town to bring some of what makes Reconstructionist unique,” Hordes said. “Maybe there are Jews here who have not found an approach to Judaism that suits them and will find inspiration in Reconstructionst theology and practice.”