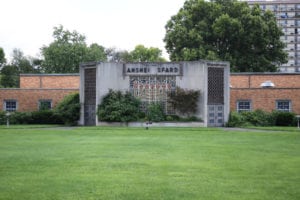 With an agreement pending to sell the Anshei Sfard synagogue and real estate, Louisville’s only Orthodox  congregation is now thinking about its future at a new location.
A Texas-based real estate development company, Bomasada Group Inc., has contracted to buy the five-acre Dutchmans Lane parcel, which includes the synagogue, the mikvah building and two houses. Bomasada plans to tear down the structures and build an apartment complex of approximately 280 units in its place.
The company has nine months to close the deal, but that timetable can be extended to a year if the rezoning necessary to start construction is not complete.
But Fred Levein, a broker for RE/MAX 100 and Anshei Sfard’s agent in the deal, doesn’t anticipate any problems.
“It’s an excellent use for the property,” he said
All of which means that the upcoming High Holy Days at Anshei Sfard will likely be the last for the venerable synagogue, according to Rabbi Simcha Snaid.
Now, the congregation is turning to the future.
It plans to relocate to the second floor of Shalom Tower. Snaid said a transition committee to oversee that move is already in place, though no contract has been signed yet.
“We’re going to try to make it as warm and appealing and inviting as possible,” the rabbi said of the congregation’s future home.
But, he stressed, it’s only a temporary home. Eventually, the congregation wants to move into a new synagogue scaled to fit the needs of a smaller congregation. Anshei Sfard has 31-35 members.
The congregation has yet to begin the process that would lead to a new synagogue, but Snaid said it’s not too soon to begin thinking about it.
“I plan to definitely speak about it in the near future,” he said.
In the meantime, he will have his hands full with the transition, especially as it relates to religious items that may have to be buried.
“The halachic side of it,” he said, “that’s my job.”
Levein said Anshei Sfard will make arrangements for all its religious and historic items that it plans to keep.
“We made sure to put in the contract that all artifacts of the synagogue, including the stained glass windows, can be removed by the synagogue – and will be by the synagogue – and stored for future use,” he said.
Anshei Sfard was founded in 1892 when a small group of ardent champions of “Torah-true Judaism” met in a “dimly-lit upstairs meeting hall” at 7th and Market streets to hold High Holy Day services, according to the congregation’s website.
In time, as the membership grew, the congregation purchased the old B’rith Sholem Temple at 511 South First S. It broke ground for the current synagogue in 1957.
The contract to purchase the property lends new urgency to the search for a new venue for the Louisville Community Mikvah, which is housed in a free-standing building on Anshei Sfard property. The Vaad, which owns the mikvah building but not the real estate, has a committee in place to address the issue. Snaid sits on the panel.
A mikvah, or ritual bath, is considered essential infrastructure for any Jewish community that hopes to grow. Not only is it used for purification rites of observant men and women, but rabbis of all streams of Judaism use it for conversions.
“If everything goes through, then in a year, or less than year, we’ll be off the property,” Snaid said. “We have to have something in place before that.”