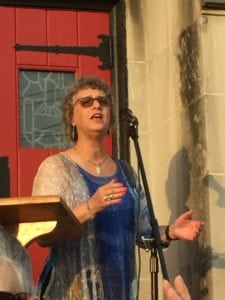 Rabbi Gaylia R. Rooks said many rabbis, including she, had signed a letter to President Trump, calling on him to denounce white supremacy. (photo by Rabbi Beth Jacowitz Chottiner)

Just as she was about to address 200 onlookers from the steps of the St. Paul United Methodist Church, Rabbi Gaylia R. Rooks sighed – deeply
“I hate that I had to have the honor to be here,” she said.
No one took offense. Everyone knew why she and 10 other religious, lay and political leaders were assembled on the steps of the Highlands area church – and why they were there, too – to mark the deaths of three innocents and the injuring of several others at a white supremacist rally in Charlottesville, VA.
Interfaith Paths to Peace, a Louisville-based NGO that promotes peace and interfaith understanding, hastily organized the Sunday evening vigil.
“We must remember this country was built on united we stand, divided we fall,” said Haleh Karimi, its executive director. “What we experienced in Charlottesville was not an act of unity, but an act of division.”
U.S. Rep. John Yarmuth and Louisville Metro Mayor Greg Fischer could not be at the program, but sent representatives to read prepared statements.
Aside from a few bikers who appeared to deliberately gun their engines to drown out the speakers as they past the church, the program went off without incident.
The vigil lasted 45 minutes, with speakers from different faiths condemning hatred, extolling love, and calling upon President Donald Trump, who had not condemned the white supremacists by name, act to unify the country.
In some cases, their words were tinted with irony.
For instance, Rooks read from a letter from T’ruah, a rabbinic human rights organization, which was signed by several rabbis and sent to President Trump before the Charlottesville rally.
The letter called on Trump to “clearly and strongly denounce this rally and all forms of white supremacy, and to enforce those words with unambiguous deeds.”
Instead, the president shocked many people, including many Republican leaders, by stating that the blame for the Charlottesville incident rested on “on many sides.”
“We sign this letter because we oppose hate,” Rooks continued, because we stand with the vulnerable, the historically marginalized, and the threatened, because we reject the current ascendance of white supremacy in our country, emboldened by the words and deeds of those in the highest positions of power….”
Dr. Muhammad Babar, a Louisville physician, speaking for the Muslim community, struck a stark note when he said many Americans thought the 21st century would be a time when racism hatred and intolerance would fall by the wayside. 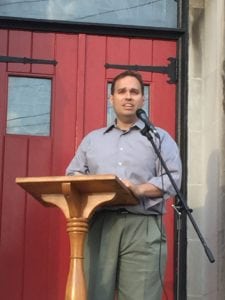 Matt Goldberg said American political leaders had condemned white supremacy violence in Charlottesville, though it was not quite universal. (photo by Rabbi Beth Jacowitz Chottiner)

“We were living in a fool’s paradise,” he said.
Babar noted that white supremacists paraded openly in Charlottesville, “this time without hoods and masks.”
He called for prayer for the victims of “Charlottesville “and for our fellow citizens who are blinded by hatred.”
Matt Goldberg, director of he Jewish Community Relations Council, said the sight of swastikas flying was obviously troubling to Jews, but it was doubly so to see it happening in the United States, and at the hands of people who professed to be patriots.
“There has been almost universal condemnation by out elected leaders,” he said, emphasizing the word “almost.”
(JCRC Chairman Rabbi Stanley Miles issued statement after the vigil, stating that hatred and fear, like love and understanding, are passed down from generation to generation.
“Hatred and intolerance must never be tolerated,” Miles said. “We look to our leaders to be exemplars of understanding. When they are not, we, the Jewish community, together with other communities, must band together to promote understanding – not total agreement on every point or every issue, but understanding – that each person is a child of God, created in God’s image and must be respected as such.”
Rev. Jason Crosby of the Crescent Hill Baptist Church, himself a third generation Southern Baptist pastor, used his standing within the church to condemn the violence in America
In fact, he read from Martin Luther King’s “Letter from the Birmingham Jail,” in which King rails against the so-called “white moderate” who “is more devoted to ‘order’ than to justice; who prefers a negative peace which is the absence of tension to a positive peace which is the presence of justice.”
Speaking for himself, Crosby added, “This white Baptist does not want to repeat the sins of the past that continue to define the present moment.”