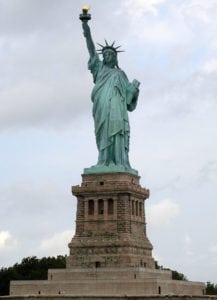 The Statue of Liberty has little to do with immigration, Stephen Miller says.

Isabel Belarsky arrived in New York in 1930 fleeing anti-Semitic persecution in Russia. Eighty-one years later, she recalled what it was like, as an immigrant, to see the Statue of Liberty as her ship approached New York Harbor.
“It was a wonderful sight,” she told CNN in 2011.
Sorry, Isabel: If you think Lady Liberty was welcoming immigrants like you, the Trump administration thinks you may have misinterpreted her message.
Explaining President Trump’s immigration policies Wednesday, White House aide Stephen Miller told reporters that the famous pro-immigration poem associated with the Statue of Liberty “doesn’t matter” since it was attached to the site years after the statue was erected.
The poem, “The New Colossus,” was written by the Jewish poet Emma Lazarus in 1883, eight years after construction began on the statue and three years before its dedication. It includes lines long associated with America’s embrace of immigrants: “Give me your tired, your poor, your huddled masses yearning to breathe free.”
When CNN’s Jim Acosta asked Miller whether a new immigration bill favoring English-speaking applicants and vetting potential immigrants according to their skill sets is “keeping with American tradition” and the spirit of the Lazarus poem, Miller said that the poem doesn’t matter since it was “added later” to the statue.
“I don’t want to get off into a whole thing about history here, but the Statue of Liberty is a symbol of liberty and lighting in the world; it’s a symbol of American liberty lighting the world,” Miller argued. “The poem that you’re referring to was added later. It’s not actually part of the Statue of Liberty.”
Although not an immigrant herself, Lazarus, the daughter of a family that traced its roots to America’s first Portuguese Jewish settlers, wrote the poem about the statue and in response to what her biographer, Esther Schor, called the “pain of the world’s exiles.” Although a plaque inscribed with the poem wasn’t placed at the site until 1903 — six years after Lazarus’ death at age 38 — its message and its inspiration became inseparable,  especially as New York became the nation’s busiest entry point for new immigrants over the next four decades.
“The Statue of Liberty was not conceived and sculpted as a symbol of immigration, but it quickly became so as immigrant ships passed under the torch and the shining face, heading toward Ellis Island,” wrote John T. Cunningham in a history of the immigration inspection station. “However, it was [Lazarus’s poem] that permanently stamped on Miss Liberty the role of unofficial greeter of incoming immigrants.”
Franklin D. Roosevelt and Lyndon Johnson were among the presidents who gave pro-immigration speeches at the base of the statue.
Twitter wasn’t kind to Miller’s appraisal of the poem. “WHAT?!! @POTUS advisor Stephen Miller says Emma Lazarus poem on Statue of Liberty ‘meaningless.’ Stephen, you are a Statue of Arrogance,” tweeted the Anne Frank Center for Mutual Respect.
Peter Sagal — host of the NPR quiz show “Wait Wait…Don’t Tell Me!” — seemed flabbergasted by Miller’s assertion (which, to be fair, is technically true).
And some termed it ironic that Miller’s own great-grandfather, Sam Glosser, immigrated to America from his native Belarus.
And if the statue is no longer what Lazarus called the “Mother of Exiles,” someone may want to notify the National Park Service: Its web site refers to Lady Liberty as “The Immigrant’s Statue.”