(Editor’s note: Jewish Louisville’s teen athletes are in Birmingham, Alabama, for the JCC Maccabi Games from July 30 to August 4. Louisville sent 11 teens — all boys — to compete in baseball, football and soccer. J Teen Director Kari Semel will be sending back updates from the week-long event.)

Hello from Birmingham!
The first day at the JCC Maccabi Games was a success. After making new friends on the bus from Nashville, the Louisville delegation spent some time getting to know their host families.
Last night’s opening ceremonies were unforgettable. With an address from Bruce Pearl and a performance by Matisyahu, all of the athletes were ready to officially begin the games.
Monday morning, our baseball and flag football players won their games, while our basketball and soccer players experienced losses. After lunch, all of our players will compete again, before it’s time to relax with their host families for the evening.
Tuesday morning, our Tisha B’Av program begins at 16th Street Baptist Church before heading to competitions for the afternoon.
Look out for another update tomorrow. 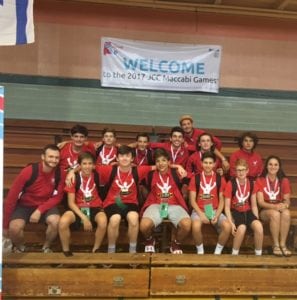