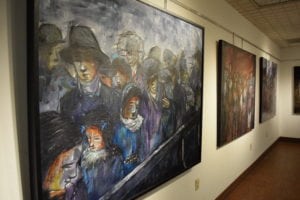 The Trilogy series, pictured here, is part of the Shadowy Background art exhibit by Joel Toste, which is on display in the Patio Gallery. (photo by Courtney Hatley)

(Editor’s note: This is a revised version of a story that appears in the latest print edition.)
The Shadowy Background, a new exhibit by artist Joel Toste in the Patio Gallery at The J, is an evocative exhibit that touches on the themes of immigration, the Holocaust and finding one’s identity.
The 10 oil-on-charcoal canvases that make up the exhibit fill the walls of the gallery, challenging the patron to look deeper than the expressive face or group depicted.
“My artistic production unarguably stems from a life that has always been fed by an incessant need to express, an inability of being able to shout out, a constant desire to write on canvas the words that I never say,” he said. “I consider painting to be a way of channeling all that I feel into a space in which I can give life to my deepest sentiments – those that the eyes can’t see even after they’ve filled a canvas.” 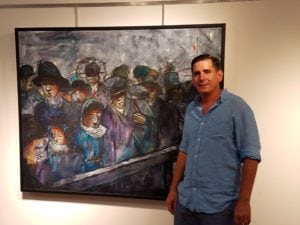 Joel Toste with a painting from his Trilogy series. (photo provided)

A Cuban immigrant, Toste understands firsthand what it means to lose one’s homeland and to search for one’s self. Some of those themes are caught in the Trilogy series, three paintings that Toste created especially for this exhibit.
The Trilogy paintings, all depictions of the Holocaust, show people as they are forced from their homes, sent to concentration camps and, finally, led to the gas chambers. Toste considered those paintings an important platform for expressing his own loss of home.
“The topic of the Jewish Holocaust and the Final Solution is one that has created an impact on me since I was old enough to have the ability to reason,” Toste said. “I have never been able to understand how people who existed in recent history could commit such atrocities. I cannot even begin to imagine how it occurred, but it did.”
The exhibit, and particularly the Trilogy, are hauntingly beautiful and Toste expertly captures the human raw emotion.
“When I think about painting I can’t help but think about poetry,” he said. “To paraphrase Da Vinci, painting is poetry that is seen rather than felt; poetry is felt rather than seen.”
A Louisville resident, Toste is a businessman as well as an artist, running the Havana Rumba Cuban Cuisine restaurants with his partner, Pedro Hernandez.
The Shadowy Background will be up until August 16. The Patio Gallery is open Monday-Thursday, 10 a.m.-8 p.m., and Friday-Sunday, 10 a.m.-5 p.m.