July marks the kick off of the Ibn Ali boxing program, a four course boxing series designed for both kids age 5-14, and adults 15 and above, alike. The nephew of Muhammad Ali, cousin to Laila Ali, and son of Rahmen Ali, his pedigree is far beyond his namesake, including almost two decades of professional experience and a United States Boxing Council cruiser weight title which he secured with a sixth-round knockout of Jeff Fox on April 15, 2006. The program is designed to teach the fundamentals of boxing, which includes a strong dedication to cardiovascular exercise, and hand-eye coordination, designed in a way that all entry levels are welcome. 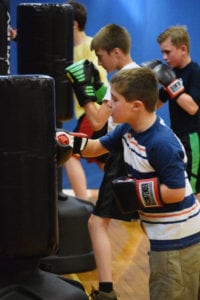 The evening started with making sure that the kids are safe. Coach Doug Meyers sat patiently with everyone present and made sure that they were taken care of, in a way that put the burgeoning boxers at ease. The crew was small, but encouraged to listen and participate, all eager to move. Ages running from elementary to lower high school, the boys in the class all have an apparent hunger to learn. Ibn Ali made it clear from the get go that the emphasis is on fun, first and foremost.

They started with jab exercise, going through the proper motions to stick to form while moving, with a focus on balance. No one was left behind. Every student in the class was given attention no matter their skill level or dedication, as Ali and Doug shouted words of encouragement.

And they did. Every move was telegraphed in a linear progression that starts with form, and moves to different punching styles. The kids were pivoting and stringing left and right hand jabs, weaving in and out. Despite different strides, the students moved in unison to each command.

As the students filtered out they were equally excited and exhausted from their work, visibly pleased with their experiences. Carson Blumenthal, the youngest in the group, was all smiles leaving the gym. He says, “It was awesome, I loved it. I love boxing. I learned a lot of jabbing, one two. I loved punching that bag.” 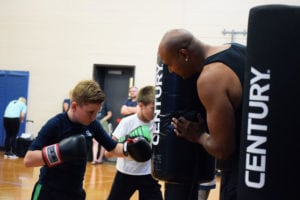 Friends Owen Sexton and Chase Pearson, both middle schoolers, were happy to have an opportunity to work together on something they find fulfilling. Sexton says that his instructors made it fun.

Pearson adds, “It was pretty fun. My dad had worked with me on some of this stuff, but then my friend Owen -his mom had found out about this- we decided to do it.”

The journey for the students is a measured course, plotted by Ali to play to their strengths and attention spans. The fact that everyone walked away happy – no small feat for a group of young boys forced to exercise – is a testament to Ali’s skill and Couch Doug’s dedication and drive to build better fighters, but not at the cost of a good time.

Kicking off the adult class went a little quicker, with a co-ed cross section of ages ranging from late-teens to early-40s. As soon as everyone was prepared, Ali lined everyone up and got the group stretching. After that, Ali and Coach Doug split the group in half, with some working the same lunge lessons as the kids group, and the other practicing on the heavy bags. A timer was set and off they went, punching, jabbing, and lunging across the gym floor or at the gym bags, finding their feet and their rhythm along the way.

It was a quick succession from there, with the groups moving on to different activities immediately thereafter. Now one group was at the bags and the other jumping rope, a demonstration of the cardio workout that boxes offers, short bursts of intense and varied activity. Skills were uneven, but the Ali and Coach Doug made it work, never straying from their training objectives. So, it went, with students varying their exercises from one activity to the next in short order.

“Imagine how good you guys are going to feel after three sessions. Amazing!” 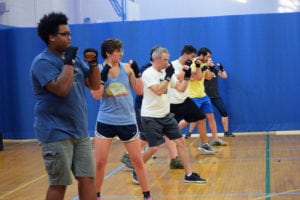 Ali and Coach Doug never miss an opportunity to shout words of encouragement, which keeps the energy high and the motivation strong. You could see it palpably on the students faces, straining under the pressure of their work, but determined to follow through with their expectations. Sweat was dripping and breathing was short, satisfied by brief interval cooldowns in between each session, all the while Ali is following suit and showing the class the proper technique.

The room is hypnotic with the sounds of barked commands. Jab. One Two. One Two Hook. One Two. Jab. A dizzying dance designed to build fighters. There is a ballet quality to the work, positions designated by numbers of short commands, punctuated by a brief pivot and the promise that staying loose is the best way to remain flexible. Ali smiles, encouraging the brief rests, and promising that they’ll need it. Judging by red faces and short breath, it’s apparent that they do.

Coach’s promises are golden and you know it, so much that Ali joined the line up to jab and pivot across the floor, poetry in motion. The command goes out to put the gloves out and an attentive group jumps at the opportunity to go berserk, the last in their course of exercises: speed punches. Through a grin Ali admits, “I hated this when I started training.”

A blur of hands set to the heavy bags, left, right, left, right as fast as absolutely possible, set to a two-minute timer, a cacophony of brutal noises as blows rain throughout the gym. Coach Doug yells encouraging comments, Ali getting in their faces firing up the students to give it their all, as they whale on a bag, arms like spaghetti. The peak of their work out, you can see real strain visibly. The exercise ended with a smattering of clapping, just prior to Coach’s admission that they have just one more mile to hike, one more thirty second speed bag session.

An hour or so after it started it ended, a flurry of short exercises with a tangible outcome. Everyone was feeling it, breathing ALI BOXING Continued from page 1 heavy and drenched, awakening the champion, according to Ali.

A sweat soaked Seth Johnson, one of the participants in the course, said that it was fun, but worth it. He says, “It was a tough work out, but I liked it. It was exactly what I wanted it to be.”

For Jennifer Jacobson, who is taking the class with her son Carson Blumenthal, it was just what the doctor ordered.

“I liked that they had us out there right away doing stuff. They threw us right into it. I got a lot out of it. The energy of it, doing something new. We were all working on our own, but we were all working together. We were strangely a group. I’ve been meaning to do this for years. They always say that boxing is more cardio than you think it is, and that’s true. It feels a little awkward, but I’ll get there,” says Jacobson.

When they least expect it, Tomi Levinson and Lior Sulami, are captivated by what they teach their kids at the J’s Summer Camp. “I read the little kids a book. It’s called The Lion That Loved Strawberries,” Levinson said. …

Johnny Kimberlin knows a thing or two about swimming. The self-described “pool rat” has been attracted to the water since he was a kid. He swam for championship teams at St. Xavier High School and he’s coached middle and high …