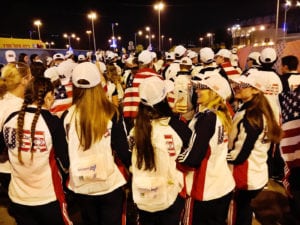 The opening ceremony was the coolest, craziest and most surreal experience of my life.
We were shuttled from Tel Aviv to Jerusalem at 2 p.m. and for three hours we walked around the hockey stadium right next to where the ceremony was held and met all of the other countries.
We were supposed to bring our pins so that we could trade with other countries, but of course, my whole team forgot so we had to get creative. Instead, we gave away our Snapchat usernames, phone numbers, and flat out begged for pins from all the other countries. It worked great even though it was a new level of desperation. I got pins from Australia, Brazil and South Africa; it was so cool! 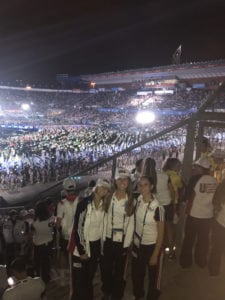 At 6 p.m., we were herded (like cattle) into a tunnel where we waited for another three hours until we actually got to march out. I have never chanted so loudly, sweated so much, or felt so much pride for my country in my life. It was unbelievable.
We were the second to last to march into Teddy Stadium; Israel was last. The entire equestrian team walked out on stage in front of the 15,000 spectators, arms linked, chanting USA as loud as we could. The spectators were pushing each other to get to the front just to give us all high fives. I felt like a celebrity! I didn’t stop jumping until the security guards came up to us and told us we had to sit down.
We sat with athletes from all over the world with whom we started trading our tracksuits. I did take my shirt off in the middle of the ceremony because I had to have an Australian polo. Yes, it was worth it.
The actual ceremony was interesting. There was a weird wedding, some history lessons, impressive performances, and – no surprise – more chanting. I don’t think I stopped smiling even though we hadn’t eaten since 2 p.m. If you know me, you know I am not happy when I am hungry, so that really says a lot about how amazing it was.
I cannot put into words what it was like to walk into Teddy Stadium representing my country with the best Jewish athletes in the world; I will say it was the best night of my life. The pride, excitement, and cohesiveness felt marching with my team was overwhelming.
I am so lucky to be here, and I can’t thank everyone enough for all of their support!