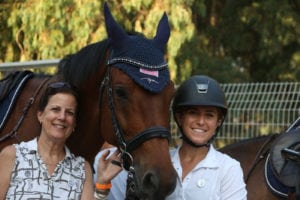 Andrea Glazer and her mother, Karen Abrams, pose with Chin Chinello, the horse Glazer is riding at the Maccabiah Games. (photo provided by Andrea Glazer)

Not because of Israel, but because being a jumper rider is so different from an event rider.

They’ve never heard of a monoflap saddle, and I am the only person here with a monoflap.

I also thought that we were supposed to wear white gloves because that’s what we do in eventing, and I think it looks professional. I was told that if I wore white gloves I would look like a “noob.” Thanks Syd 😊 They also don’t wear stock ties, trot jumps (even during the warm-up). Some don’t even show in hairnets.

We completed round 1 and I finally feel like I can relax for a second. It was so hot, but the jumper team felt that the decision to wear our pink coats wasn’t optional. I walked the 1.15-meter course with Kate, trying to calm my nerves and not puke everywhere.

I got to watch a few rounds, including my teammate Cloe’s, while my mom so kindly put Chin Chinello’s studs in. Thank you, Mom. The course was difficult for some, but Cloe put in a great round despite her horse, Manny, being a little spooky. She came out clean with only one time penalty, which put her and the team in a good position. 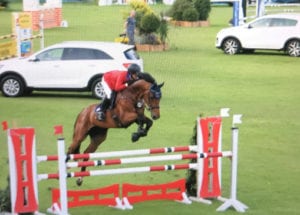 I was the next rider to go for Team USA. I got on and immediately felt Chin Chinello’s freshness from the atmosphere in the stadium. I spent my warm-up trying to stay on all 17.2 hands of him, while he bucked after every jump. There were only two jumps in the warm-up that each coach had to fight over, since there were at least 15 horses sharing the tiny space. I was honestly more nervous in the warm-up ring than in the actual ring because it was so packed!

Once I cantered into the stadium, I walked up to the spookier jumps so Chin Chinello could see them and started my course.
I started out under-paced due to my nerves, which resulted in a rail down at jump 4, and then at jump 5 — the jump causing the most falls and stops. Chin Chinello tried to refuse and I could feel the whole stadium behind me clucking while I smacked him over it. After that, I think we both got our act together and finished the last eight jumps clean!

We ended with one rail and three time penalties, which obviously isn’t putting us in the top of the group, but everyone was ecstatic including my team. It took me a second to realize that I should be happy about my round because it hadn’t set in that I finished my first round.

Haley was next, and put in an amazing double clean round. Haley and Harley made the course look so easy and didn’t miss a distance. Syd was the last rider for our team, and the second to last at the show. We saw falls, refusals, rails — it was a way harder course to ride than it looked and Syd was on an Israeli horse that she leased, so we didn’t know how he would be on course, just like Chin Chinello. She rode amazingly, with one rail down, to complete the first day for team USA. We are currently sitting in second, behind team Israel, which got to ride all of their own horses. Today the jumps are bigger and we get to do two rounds. There is live streaming of the event on the Maccabiah Equestrian Facebook page, and it starts at 5 p.m. Israel time.

July marks the kick off of the Ibn Ali boxing program, a four course boxing series designed for both kids age 5-14, and adults 15 and above, alike. The nephew of Muhammad Ali, cousin to Laila Ali, and son of …

The North Carolina state legislature passed a bill that would bar the state from doing business with companies that boycott Israel. The bill passed last week by both houses of the General Assembly has been sent to state Gov. Roy …

The J swim team continued its dominance at the Louisville Swim Association (LSA) Championship on July 17 at the Oldham County Aquatics Center, winning the Division 3 title for the third time in six years. The Gators finished first with …