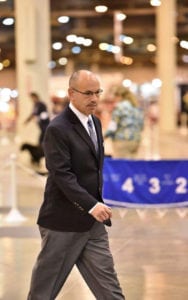 Harry “Butch” Schulman of Louisville will judge Canaan Dogs at a specialty show in Atlanta this October. (photo by Diana Han, provided by Connie Du Bois)

Harry “Butch” Schulman is the quintessential dog person. Not only has the retired Air Force lieutenant colonel bred collies for years, he is a licensed judge at American Kennel Club (AKC) shows, certified for the Herding and Working groups, half the Sporting group and some Terrier breeds.

But he’s fascinated with one particular breed.

Schulman kvells for the Canaan Dog, the only recognized breed in the world with its roots in Israel.

“The history of the breed is connected to my Jewish history and heritage,” Schulman said.

As the Israelis would say, meya acuz (100 percent).

While there are no known Canaan Dog owners in Louisville – it’s not one of the AKC’s more popular breeds – Schulman will see plenty of them on October 19 when he judges a specialty show for the Canaan Dog Club of America (CDCA) in Atlanta. He also will judge the Herding group at the November 23 Philadelphia Kennel Club National Dog Show. That event, which falls on Thanksgiving, will be televised at noon on NBC.

“Everything about this breed is Jewish,” Schulman said, “down to the names of the kennels.”

Oh, and the club’s newsletter is called the Canaan Kibitzer.

While the AKC only recently recognized the Canaan Dog, the breed’s lineage dates back more than 2,000 years. In fact, drawings of its ancestor, pariah dogs, have been found on tomb drawings at Beni-Hassan cemetery in Egypt.

Ancient Israelites used them to guard their herds.

As the Hebrew population declined, though, many pariah dogs sought refuge in the Negev Desert and became part of the wildlife there. They remained largely undomesticated for centuries, though some lived with Bedouin tribes and with the Druze on Mt. Carmel.

Not until the mid-20th century, did the breed’s fortunes begin to change. 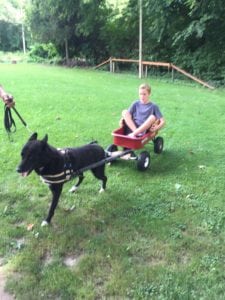 Canaan Dogs are strong and smart enough to perform a variety of tasks. (photo provided by Bryna Comsky)

Dr. Rudolphina Menzel, an Austrian cynologist (canine specialist), and her husband, Rudolph, a physician, trained their dogs to follow Hebrew commands. After the couple fled to Palestine in 1938, the Haganah asked Rudolphina to develop a dog that could guard remote settlements and do other wartime jobs.

Concluding that standard breeds could not withstand the region’s harsh climate, she turned to pariah dogs, collecting puppies and adults and starting a program of redomestication.

Menzel found the dogs highly adaptable and quick to learn. She renamed the breed the Canaan Dog, because they came for the land of Canaan, and trained them to perform many wartime tasks, most notably detecting land mines.

Her first Canaan which she named Dugma – Hebrew for model – became a standard of sorts for the new breed.

“They chose him for his beauty of form,” said Bryna Comsky of Schaumberg, IL, and a Canaan Dog breeder for nearly 40 years. “He was a beautiful dog, but his descendants were modeled after him.”

After the war, Menzel trained her dogs to serve the blind through the Institute for Orientation and Mobility of the Blind, which she founded.

She first exported Canaan Dogs to the United States in 1965. Still, it would be another three decades before the AKC finally recognized the breed (1996).

“It was diverse in appearance,” said Comsky, who runs Ha’Aretz Canaans in Schaumberg, “it didn’t have continuity in type.” 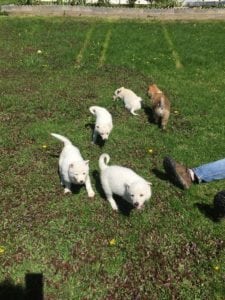 That was a red flag for the AKC, she said. “They told us you have to look at a Canaan Dog and recognize this is a Canaan Dog, not an akita, a border collie or a basenji.”

She became interested in the Canaan Dog in 1969 while scanning The New York Times for an ad for basenji pups. Instead, she saw one for Canaan Dogs, which referred to them as “rare gems from Israel.”

The daughter of ardent Zionists and a longtime Israel booster, she was hooked.

On her next trip to New York to see her parents, she visited Philadelphia, where the breeder lived, and picked up her first Canaan Dog – Spatterdash Dreidel.

While there, she also bought in to the quest to make the Canaans an AKC-recognized breed.

“They told me how important it was to get more Canaan Dogs in the country and around to show continuity of type, so the American Kennel Club would be more likely to recognize them,” she said. “That story caught my attention. I saw it would be a lot of work and striving to take the breed to recognition.”

But it became her life’s work.

“I thought it was the most important thing in the world to get the Canaan Dog recognized by the American Kennel Club; that would insure the existence of the breed.”

Today, she has five Canaan Dogs and continues to breed them.

She breeds selectively, keeping mind the goals of breed type as well as temperament.

“Even in this day we need to be aware of breeding for good and acceptable temperament,” Comsky said. “It needs to be able to go out in public and behave itself.”

The Canaan Dog isn’t for everyone.

“They’re very devoted to their family, Schulman said. “They are highly territorial, and they’re very protective of their owners and their owners’ property. This should not be for a first-time dog owner.

“You have to understand; 1948 is recent history,” he added. “You’re talking about a dog that was domesticated in the middle of the last century. They still have a natural tendency to be very guarded of their territory or flock.”

Even at dog shows, Schulman said, judges must approach them carefully.

Far from a popular breed, most Canaan Dogs are found in Jewish population centers – New York, New England, Atlanta, the United Kingdom and – of course – Israel.

It still faces an uncertain future in America.

“I would say it is an endangered species in this country,” Comsky said. “We have 50 dogs registered yearly in the AKC Stud Book (a record of pedigrees going back generations).”

Compare that to the “thousands” of Labs that are registered each year.

And that’s one reason why Schulman, whose day job is  executive director of the Department of Ophthalmology and Visual Sciences in the University of Louisville School of Medicine, likes to talk up the breed among Jews.

“I think it’s important that people understand there is a breed of dog that is identified with their history and culture,” he said. “Maybe one or two people read your article and go out and find a Canaan Dog. That’s the beginning of perpetuating the breed in America.”

While he’s been judging Canaan Dogs for four years, Schulman doubts he will ever own or breed them. His heart still belongs to collies.

“Once you become bonded to a breed of dog, like I am to collies,” he said, “that’s a lifelong dedication and passion.”

July marks the kick off of the Ibn Ali boxing program, a four course boxing series designed for both kids age 5-14, and adults 15 and above, alike. The nephew of Muhammad Ali, cousin to Laila Ali, and son of …