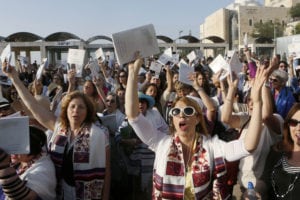 Women of the “Women of the Wall” organization wear prayer shawls and tefillin as they pray at the Western Wall, July 08, 2013

JERUSALEM — Three AIPAC leaders reportedly told Prime Minister Benjamin Netanyahu that “we have lost the incentive to act for Israel” and of a “crisis of faith” among American Jews in the aftermath of the freezing of the Western Wall agreement.

The leaders spent about a day in Israel and left Thursday night after their meeting with Netanyahu, The Times of Israel reported.

AIPAC has not commented on the meeting.

On Wednesday, the Conference of Presidents of Major American Jewish Organizations, which represents more than 50 national Jewish groups, in a letter to Netanyahu said that a lack of unity between Diaspora Jews and Israel over the Western Wall agreement “could lead to an erosion of support.”